When the iPhone 5 release date rolls around on September 21st there will no doubt be lines at Apple Stores across the country.

Waiting in line on a Friday is hardly a good use of time, but for users that don’t plan to pre-order the iPhone 5 it may be the only way to get one on release day.

Users who plan to buy an iPhone 5 in store on September 21st, but prefer to pay someone else to stand in line while they do something productive don’t need to rely on Craigslist, they can turn to TaskRabbit.

Read: How to Make Sure You Get an iPhone 5 on Release

TaskRabbit is an awesome service in New York, San Francisco and other cities that connects users with runners willing to perform tasks for a variety of fees.

On September 21st TaskRabbit is sending out TaskRabbits to stand in line for users that want to buy the iPhone 5. TaskRabbits will wait in line for up to four hours at an Apple Store of the user’s choosing, and switch places at the last-minute.

Users who hire a TaskRabbit to wait in line for the iPhone 5 are entered to win one of two free iPhone 5 phones, with winners announced on September 20th. 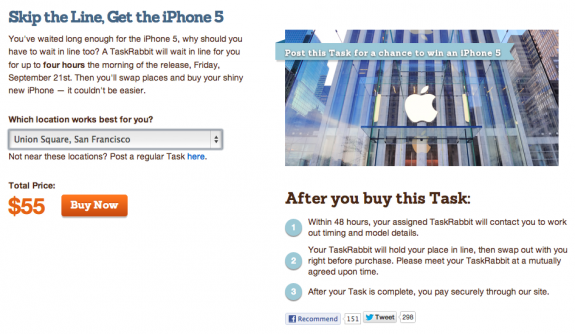 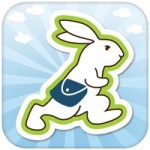 It may sound like a waste of money to pay someone to wait in line for the iPhone 5 for you, but if it means working for another four hours, the value is worth it for busy users.

TaskRabbit can also help users find someone to stand in line for an iPhone 5 in Boston, Austin, Chicago, LA & OC, Portland, San Antonio and Seattle, but they will need to create a generic task.