If you received a text message asking you to be a part of the iPhone 5 test program, don’t respond to it or follow any links contained in it unless you want to get spam until you change your number.

Numerous users are reporting text messages from a variety of numbers asking them to join the iPhone 5 tester program, after which you will get to keep the iPhone 5. 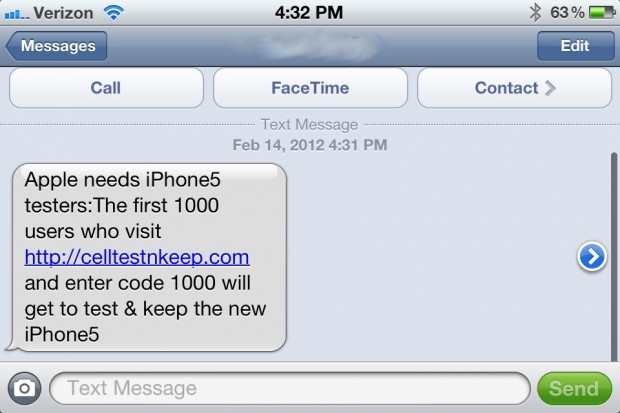 This text message asking for iPhone 5 testers is not legit.

Apple needs iPhone5 testers:The first 1000 users who visit https://celltestnkeep.com and enter code 1000 will get to test & keep the new iPhone5

Apple needs iPhone5 testers: the first 1000 users who visits https://testmobilesnow.com and enter code 1000 will get to test & keep the new iPhone5.

We’ve seen over 60 reports of this text message appear on different message boards, including users posting their phone number and contact information to try to get their iPhone 5.

If you follow the links in the text message you will be redirected to a site that wants your email address and will potentially ask you for much more down the road.

First off, Apple doesn’t allow the public to use their products until they announce the product, and even then, it wouldn’t be through a sketchy program like this.

If you keep getting texts from the same number you can block numbers form your cell phone account. You should let AT&T or your carrier know about the spam so you are not charged for the text.