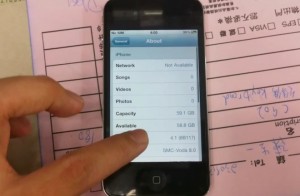 It appears that someone in Hong Kong had managed to acquire an early iPhone 4 prototype manufactured for Apple by China’s Foxconn manufacturing facility in Shenzhen with 64 GB of on-board storage.

News of a 64 GB early iPhone 4 prototype has the Internet wondering if the Cupertino, California company may release a 64 GB version of the next-generation iPhone 5.

Speculation on the Internet suggests that Apple had, at the time of designing the iPhone 4, considered a 64 GB model, but decided against that due to costs of increased on-board storage.

Another possible reason is that Apple probably did not want to cannibalize sales of the iPad tablet, which was available in either 16, 32 or 64 GB sizes; the company probably wanted to differentiate its smartphone with lesser storage than the emerging tablet market by allocating more local storage capacity to the iPad.

Now that the iPad has proven itself in the market as a dominant player, providing Apple with $10 billion of revenue for that market in 2010, the company may be looking to match the storage capacity of the iPad on the iPhone. If true, the next-generation smartphone may come in larger capacities, variants for AT&T and Verizon Wireless in the U.S., along with the newly announced dual-core ARM-based A5 chipset that is debuting on the iPad 2.

Another iPhone 5 rumor that has surfaced recently suggests that the device may get a re-design to bring back the all-aluminum back from Apple’s first generation 2G, EDGE only smartphone. However, current speculation has it that the iPhone 5 may sport the same glass and stainless steel sides of the current iPhone 4 model, making it an incremental refresh bringing refinements, much like the transition between the iPhone 3G and the iPhone 3GS.