Each phone comes with an 8MP camera. Both shoot HD video and offer pinch zooming and tap focusing. They also include HDR and panorama mode. The Galaxy S3 camera app includes a lot of shooting modes from burst to beauty and macro to cartoon mode. It also offers some creative filters.

Out of the two camera apps the Samsung Galaxy S3 wins the most options, but many prefer a simpler camera like the Apple iPhone 5’s. 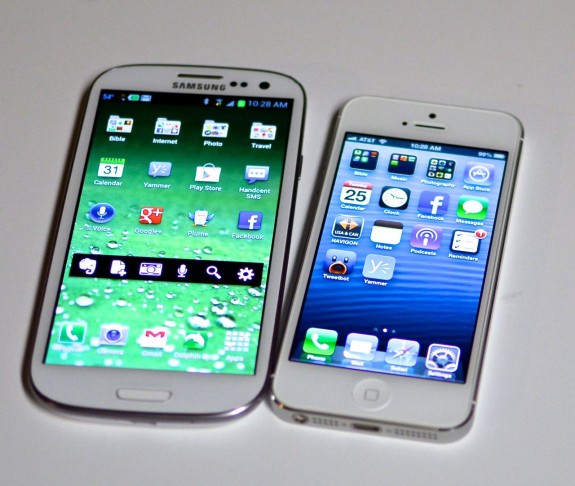 We tested many areas to find which phone gives the user the best camera. To compare the shots, remember to click the images below to see the shots full size. 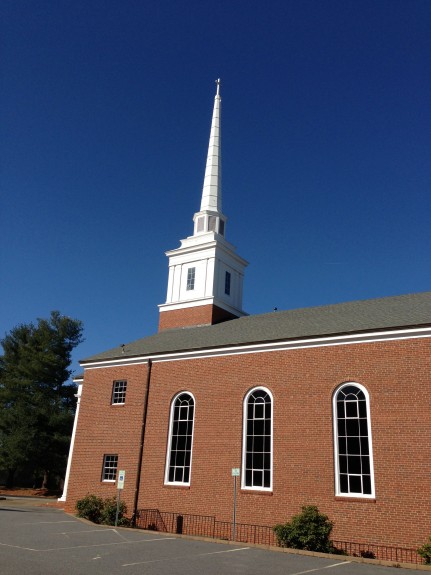 At midday the sun creates high contrast. As a result an iPhone 5 shot looked more saturated, but the Galaxy S3 reproduced the scene more faithfully despite looking lighter. Casual shooters might like the iPhone 5’s bump in saturation, while more serious photographers would prefer the more accurate Samsung Galaxy S3 shot. Notice that the blue sky and green trees in the iPhone 5 shot look darker. The Galaxy S3 shot below seems brighter and has less color. However, the lower shot more accurately captured the scene. 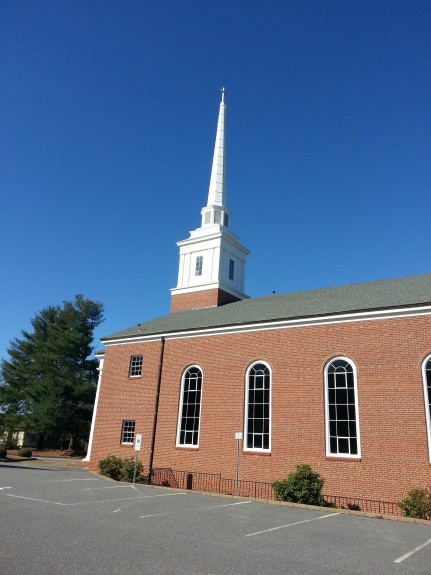 The iPhone 5 shows less detail in the trees because it’s darker. The Galaxy S3 captures more of the scene thanks to a wider lens, which is why the Galaxy S3 photo shows more of the trees, parking spaces and a glimpse at a fourth large window on the right.

The first shot from the iPhone 5 produced faithful color and detail. 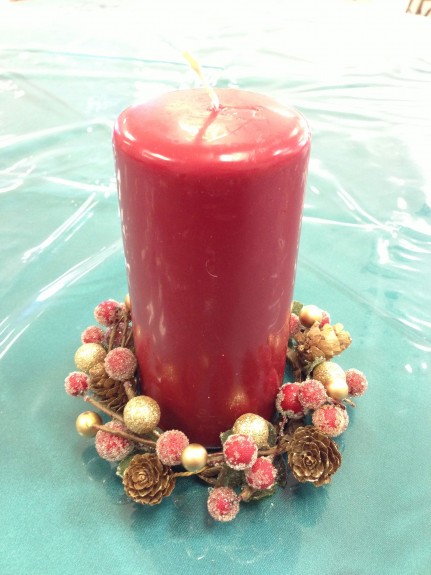 In fact both the S3 and iPhone 5 shots look similar and offer a plenty of detail. Like the outdoor shot, the iPhone indoor shot seems to bump up the saturation, making the resulting image look slightly better. 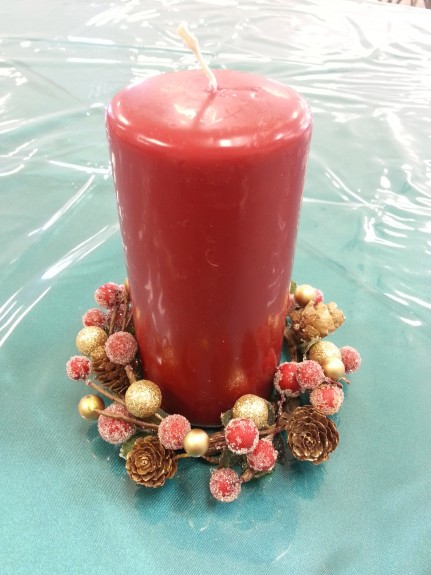 Both cameras reproduced the color of the candle accurately. Both cameras struggle with the brighter top part of the image. It’s hard to see the wick on the candle since it’s blown out in both shots.

If forced to pick, the iPhone 5 shot looks a fraction better, but we should really call this one a tie.

Here’s an indoor shot under medium light taken with the iPhone 5. This shot highlights the greatest difference between the two cameras. 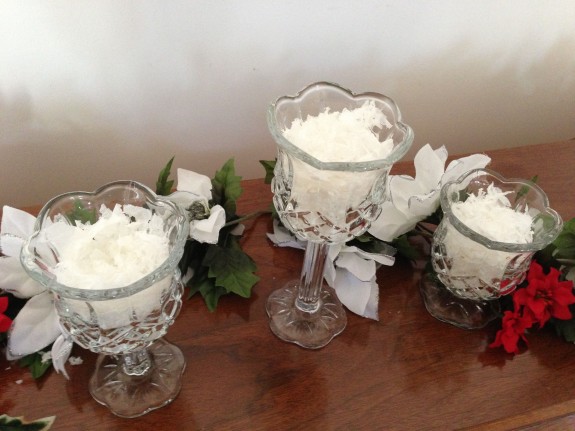 The iPhone 5 produced warmer color than the Samsung Galaxy S3 shot below. The iPhone shot looks a lot better. For the first time the S3 camera didn’t produce a brighter shot. 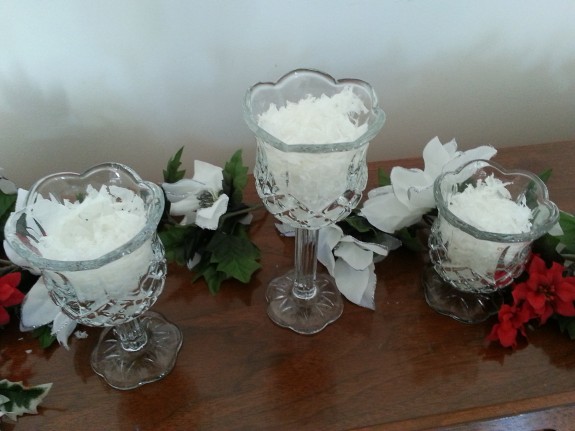 The iPhone 5 got the proper color, white balance and dealt with the medium light setting better than the Galaxy S3. The iPhone also produced a sharper image under lower light.

This trio of objects found in a desk drawer demonstrates that the iPhone 5 takes better closeup photos than the Galaxy S3. 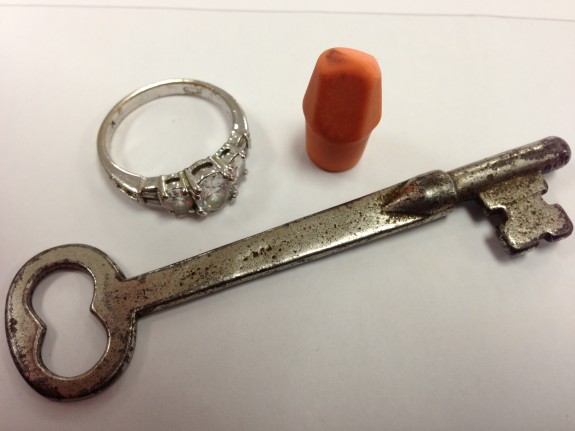 Both phones produced a nice picture, but look at the dark marks on the key in each image. The brighter and warmer image from the iPhone 5 offers more detail. 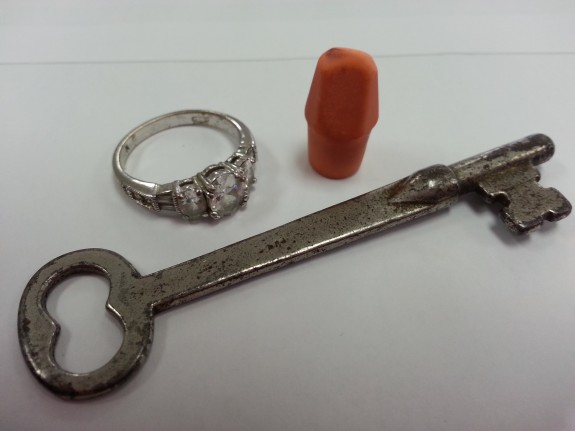 When shown at actual size below, the difference becomes clearer. Notice the finer detail in both the ring and the handle of the key in the iPhone shot. The ring looks softer in the picture on the right. 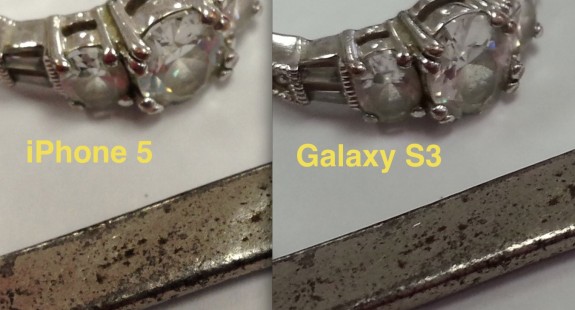 The low light samples were shot in a dark room with no lights turned on and only window light coming in from more than 30 feet away. The resulting photos make the room look twice as bright as it did in real life. 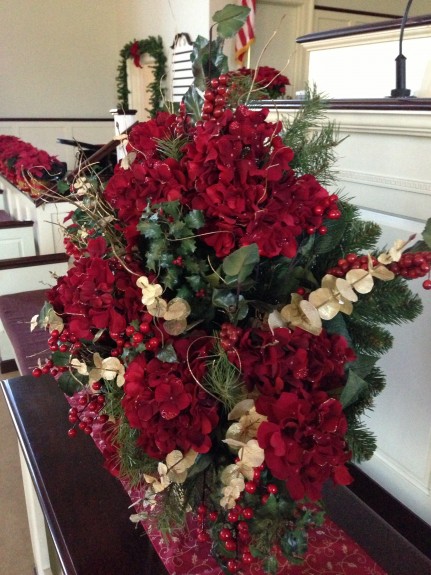 The iPhone 5 photo has a lot more detail in low light than the Galaxy S3’s photo (below). It’s also easier to capture sharp images in low light with the iPhone 5. At first glance, you can see the difference in the two photo. 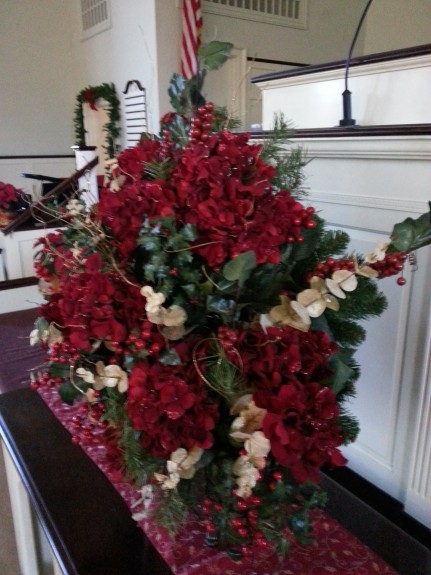 When zoomed to actual size, it’s even more clear that that the Galaxy S3’s camera doesn’t measure up to the iPhone 5 in low light. Keep in mind that this is an inanimate object and the differences can be more noticeable when shooting photos of people and other moving objects in low light. 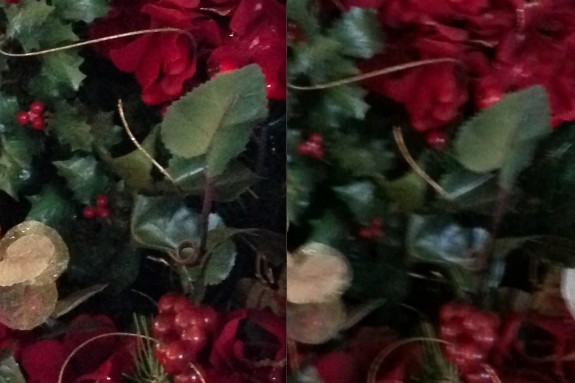 We took two shots with the Galaxy S3 fearing camera shake caused the blur. However, both shots turned out this way.

When looking at the wall behind the flowers, the Galaxy S3 higher noise level shows. Noise reduction in the shot below from the iPhone 5 (left) trounced the Galaxy S3 (right). 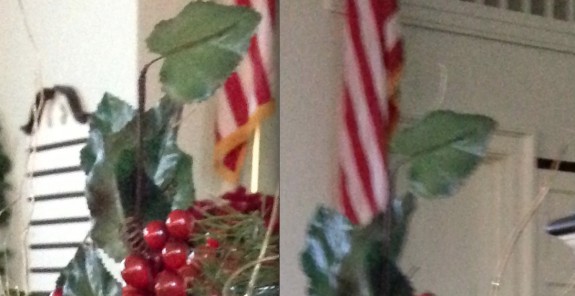 Both cameras did a good job capturing the fine detail of the leaves in these bushes as well as the bricks in the shadows behind them. 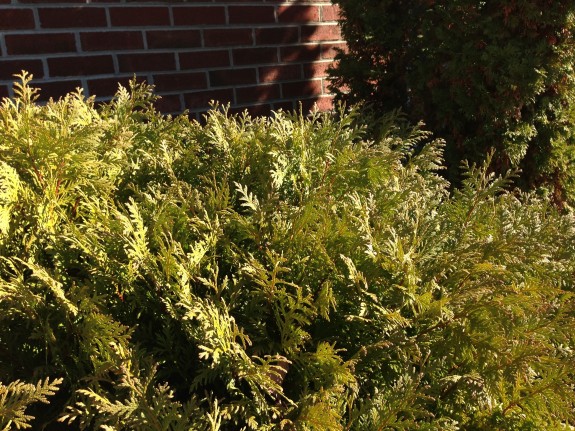 At this zoom level they look pretty close. We see the points on the leaves and the crevices in the brick. Zoomed in we can even see crevices in each brick. 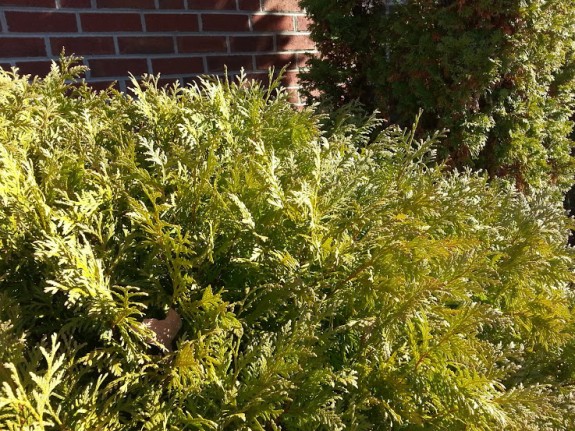 However, putting the two side-by-side as we’ve done below at actual size, the iPhone 5 camera has less detail and warmer color. The green on the leaves looks better in the Galaxy S3 shot. 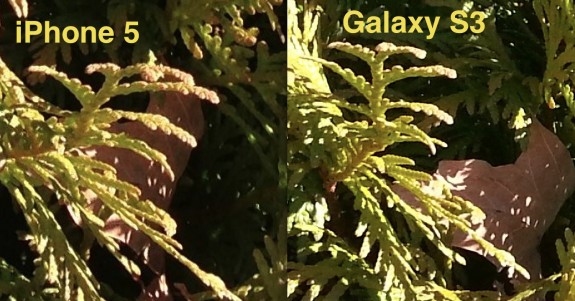 Good depth of field lets users blur a background or foreground to map a viewer’s attention on a specific element. We tested each camera and saw little difference. 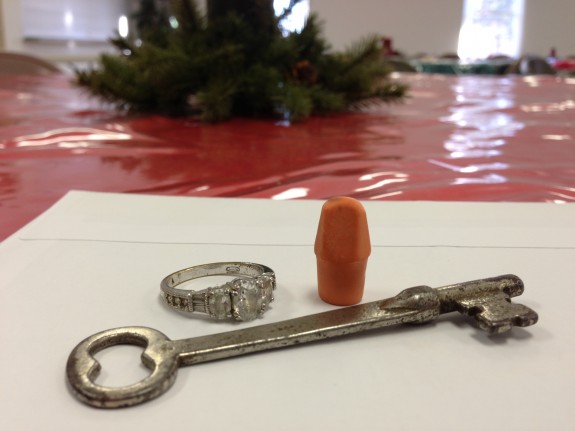 Above we see about the same amount of blur in the background as we do in the shot below. 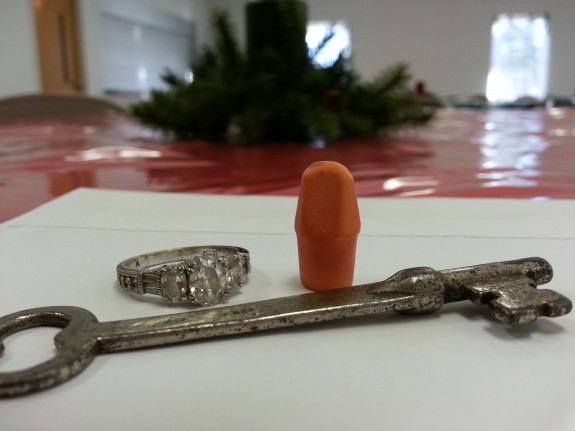 Each phone makes taking panorama easy using the same method. Point at one end of the horizon and tap the shutter button after setting the camera in panorama mode. Then move the phone across the horizon slowly. The iPhone seem to do anything feeling like we’re taking a video. The Galaxy S3 flashes the screen and the shutter sound plays each time it takes a shot. Both work great.

Like the other outdoor shots, the Galaxy S3 produces brighter photos, while the iPhone 5 produces more saturated photos with more contrast. Click each image to show full size and the detail in the iPhone 5 shot stands out especially in the yellow curb on the other side of the street.

The Apple iPhone does quick image fixes faster than the Samsung Galaxy S3. On the GS3 the user must install an app that the camera app suggests the first time we tried to edit a shot from within the camera app.

The Galaxy S3 Photo Editor app offers more options, but it’s really not built into the app. For that reasons, we give the nod to the Apple iPhone 5 by default, since the user can download plenty of great image editing apps on both platforms. Snapseed works on both platforms now and gives the user a lot of great editing features.

We already stated at the outset that the Galaxy S3 camera app offers more options and shooting modes. Both phones include HDR, panorama, tap-to-zoom and pinch-to-zoom features. The S3 also gives users more shooting modes and filters. The Android OS offers better sharing features too. Samsung wins the competition between the two apps without breaking a sweat. 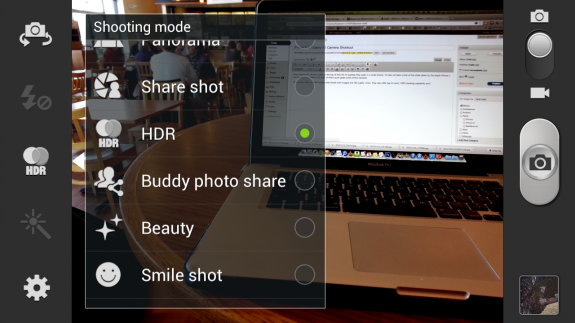 Overall, this round goes to the Galaxy S3 because of the great camera shooting and sharing options in the app and the larger screen of the phone.

In our head-to-head comparison of the two phones we originally said the Samsung Galaxy S3 camera edged out the iPhone 5. However, after this more comprehensive test, the iPhone 5 wins. The Galaxy S3 camera app offers more options and granular control of the camera. It also did a better job in the Outdoor Detail test and tied the iPhone 5 in depth of field. The iPhone 5 narrowly took the Outdoor, Indoor, Medium Light, Macro, Low Light and Quick Fix rounds.

Of course, a buyer shouldn’t pick one phone over the other just because of the camera. But if somone needs a tie-breaker, then get the Apple iPhone 5 for the slightly better camera. People who want a lot of control might think they should get the Galaxy S3 due to the more powerful camera app. However, iPhone users can download great camera apps that give the user just as much control as they get with the GS3.