While the iPhone 5c will be officially launching on September 20, Apple’s official cases for the new phone won’t be delivered until at least September 26. When ordering our own case with our iPhone 5c pre-order, we were given a 1-2 week shipping estimate at checkout, proving that some new iPhone 5c owners will have to go without a case for a few days.

The iPhone 5c went up for pre-order at midnight last night (technically early this morning) over on the west coast, while east coaster had to stay up until 3 am to reserve their own units. Unfortunately, there was no need to stay up late, as all of the models were still available when we woke up. However, we’re hearing that the unlocked 16GB yellow version of the iPhone 5c has been sold out. Indeed, Apple’s website lists this version as no longer available currently.

The 32GB yellow version is still available, though, and all five colors are still available at either 16GB or 32GB storage options on whatever contract carrier you’d like. You can grab the phone on Verizon, AT&T or Sprint starting at $99 for the 16GB or $199 for the 32GB version after signing a new two-year contract. You can also get the phone unlocked and contract-free either on T-Mobile or SIM-free starting at $549 for the 16GB model or $649 for the 32GB version. 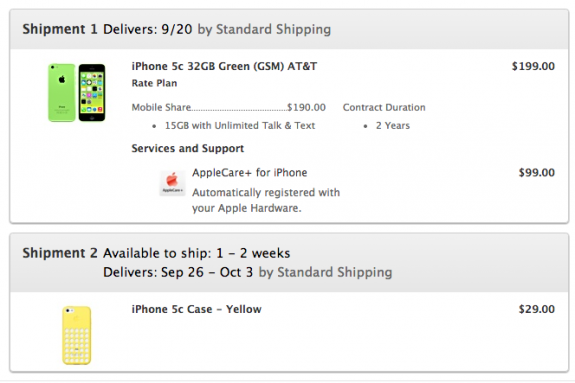 As for individual carriers, Verizon, AT&T and Sprint still have pre-orders available on their websites with a delivery date of September 20 still listed. As for retailers who are carrying the new iPhones, Best Buy requires that you pre-order the iPhone 5c in stores and RadioShack doesn’t have the new phones even listed on their website yet, so it seems retailers might not be the best place to go if you’re looking for a quick and easy way to pre-order the iPhone 5c.

As for the iPhone 5s, however, we’re hearing that it’s available to reserve at Target right now, even though the flagship phone isn’t seeing an official pre-order process from Apple or carriers. It’s a bit odd, but regardless, if you want to make sure you have an iPhone 5s come launch day, Target may be your best bet, since you can essentially pre-order it right now in stores.

The iPhone 5s is Apple’s latest flagship device, packing in a new A7 processor and a better camera. It also comes in new colors: space gray and gold. Perhaps the biggest new feature, though, is Touch ID, which is a fingerprint scanner embedded right into the home button. You can use this for authentication purposes instead of typing in a password.

As for the iPhone 5c, it’s essentially the equivalent to the iPhone 5, with the exact same internals, but the iPhone 5c comes with a slightly better camera this time around, and it’s obviously dressed in a colorful plastic shell that’s reinforced with steel. It comes with an A6 processor and 1GB of RAM on the inside, and is covered with the same 4-inch Retina display on the front. However, you can still get an iPhone 5 discounted at pretty much any carrier and retailer that sells Apple products, and we’d highly recommend getting the iPhone 5 over the iPhone 5c anyway.