A new Apple iPhone 5C video has leaked out ahead of its rumored launch, showing off what Apple’s cheap iPhone may look like next to the company’s aluminum iPhone 5 and iPhone 5S.

Apple is heavily rumored to be coming out with not one, but two new iPhones later on this year. The company is all but confirmed to be hosting an iPhone launch event on September 10th where it is expected that it will show off the heavily rumored iPhone 5S, a device that features several upgrades but shares a design with the iPhone 5.

The company is also rumored to be introducing an iPhone 5C, a cheap plastic iPhone 5S alternative that will come with a different design, cheap price, 4-inch Retina Display and Lightning port. Both devices have seemingly been leaking for the camera as of late and the latest shows an iPhone 5C yellow back plate compared to the aluminum back of the iPhone 5.

Sonny Dickson shared today a video depicting what appears to be a back plate for the iPhone 5C. He leaked a ton of iPhone 5C back plate photos just a few short days ago as well. The video shows the device in clear detail, giving prospective consumers a glimpse at what the new iPhone 5C might look like if and when it arrives.

Furthermore, the video shows off the plastic back plate next to the aluminum iPhone 5, a device that is expected to have the same design as Apple’s new iPhone 5S. The comparison video doesn’t mention specific dimensions but it’s clear that the plastic iPhone 5C will be extremely thin for a plastic smartphone. 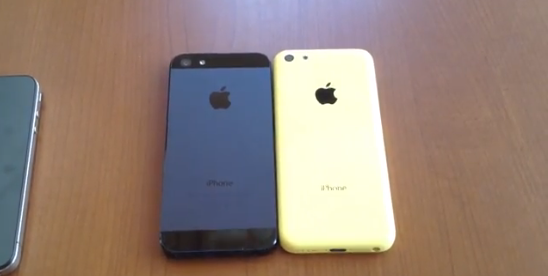 The iPhone 5 next to the rumored iPhone 5C.

The iPhone 5C appears to be thin as well.

It’s possible that consumers will hear all of the details on September 10th, a date that has been pegged for an iPhone launch. Apple has yet to send out invites to the media but sources agree that that will be the date that Apple spills the beans on the iPhone 5S and quite possibly, the iPhone 5S as well.