Touch screens are tricky things. When they work like they are supposed to its almost magic. When they don’t and you have touch screen problems, well, no magic for you, just frustration. Apple has been a leader in capacitive multi-touch screens since the launch of the first iPhone and most folks seem to agree that everyone else has been constantly playing catch up. We’re reaching a stage of parity there, but when developing these new devices companies have to be diligent. Users have been reporting touch screen woes with the new iPhone 5s and iPhone 5c (along with other issues). I don’t know how rampant this is, but a Finnish firm, OptoFidelity has been doing some testing and says that the screens on the new iPhone 5s and iPhone 5c don’t quite measure up.

From a report by Chris Hall on Yahoo News! OptoFidelity’s testing says that screens on the new iPhones are inaccurate across 75% of their displays. The tests were conducted using a robotic finger called the Touch Panel Performance Tester (TPPT) which tracks the coordinates of where touches occur. That 75% figure comes from measurements indicating that over 75% the robotic finger showed misses of 1mm. 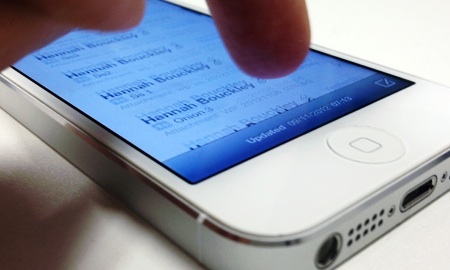 In addition testing showed good results on the lower left of the screen, with diminishing results towards the edges and at the top of the screen. According to the report in type a text message this will most likely show up with the Q, P, O, and backspace keys as an example.

OptoFidelity also points out that the TPPT robot recognizes contact at a level that most people don’t notice. So the question remains as to whether or not that 1mm difference is significant for most users or not.

For the record, I own an iPhone 5s and have owned quite a few iOS devices. In my usage the iPhone 5s touchscreen performs no better or no worse than any of the previous iPhone or other iOS devices I’ve used. Some changes to the keyboard in iOS 7 have given me some grief, but not necessarily with the keys mentioned in this report.