A new rumor from China claims Apple will release the iPhone 5S and a larger iPhone 6 in 2013, but the rumor appears less credible than the supply chain rumblings and analyst musings which normally account for the most believable iPhone 5S and iPhone 6 rumors.

The newest rumors comes via BrightWire, which points to a post on Laoyaoba where an individual claims that he has seen the iPhone 5S and iPhone 6 at Apple suppliers and that we should expect an iPhone 5S release and an iPhone 6 release in 2013.

Just like the iPhone 5S and iPhone 6, we can’t buy this rumor yet. 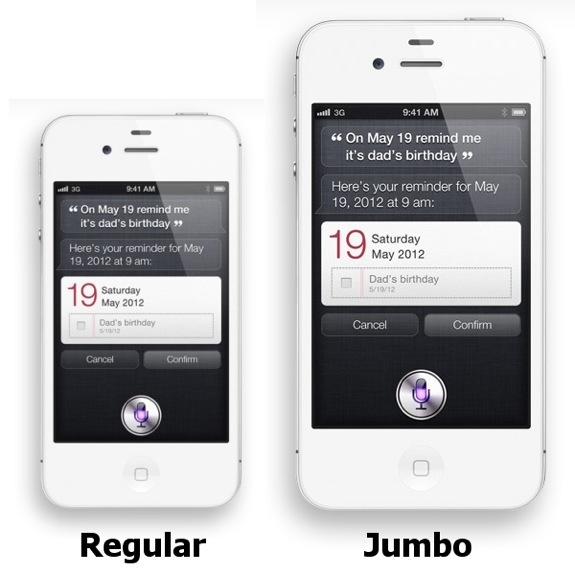 9to5Mac tracked down the source of the iPhone 5S and 5-inch iPhone 6 rumor and found that the rumor doesn’t add up, in part because the rumor is on a micro blog alongside uncorroborated rumors.

This is not the first time we’ve heard rumors of multiple iPhone sizes or a larger iPhone. Even before the iPhone 5 launched in 2012 there were rumors of two iPhones launching, a iPhone 5 and a larger iPhone. Recent reports show how Apple could launch an iPhone 5 and a 5-inch iPhone in the same year, but we’ve yet to see leaked parts or other credible rumors. Despite the lack of supporting information we’ve already seen one iPhone 6 render with a 5-inch display, shown below.

By comparison, rumors for the iPhone 5 with a 4-inch screen appeared on The Wall Street Journal in May, four months before the iPhone 5 launch. We are already seeing leaked parts that could be from the iPhone 5S, but there are no leaked parts to point to a 5-inch iPhone 6. Tim Cook recently dismissed the idea of a larger screen size for the upcoming iPhones.

Rumors point to an iPhone 5S that looks much like the iPhone 5, with a faster processor and a better camera. It is possible Apple will use new Sharp IGZO screen tech in the updated iPhone 5S, but there is no indication Apple will opt for a larger screen. There is speculation that Apple will include a hidden fingerprint reader in the iPhone 5S, something the company just won a patent for.

The latest credible rumors point to a summer iPhone 5S release date, likely at WWDC 2013. This includes reports from iLounge and from analyst Ming-Chi Kuo, both of which have a good track record with Apple rumors.