The iPhone 5s and iOS 7 have been out for almost five months now, and while the new-ness factor is still there, may users are now getting accustomed to the new layout of iOS 7 and its many new features. One of those new features is the improved and redesigned camera app.

The new interface brings a couple of nifty new bells and whistles, like filters and the ability to take a photo or record a video in square mode for various photo services like Instagram or Vine. However, we’ve heard reports of issues with the iOS 7 camera app. 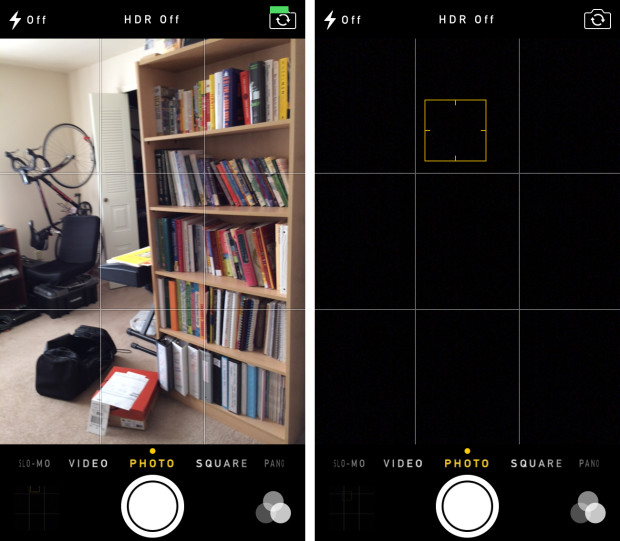 (Left: the correct view of the iOS 7 camera app; Right: the broken view that shows a blank screen.)

Like a lot of apps in iOS 7, we’ve witnessed the camera app crashing on us plenty of times, as well as failing to open when we try to access the camera from the lock screen. Furthermore (and perhaps more mysteriously), we sometimes get just a black screen where the “viewfinder”should be. The grid will still show up, as well as the focusing sight, but instead of our subject being seen on the screen, it’s just a black screen.

It’s not just iPhone 5s users who are experiencing these same problems, though. We’ve talked to several iPhone 4s owners who say they’re having the same issues with the iOS 7 camera app. Usually closing and re-opening it will fix it temporarily, but we usually see the problem come back every couple of weeks or so, depending on how often we use the camera app.

Read: How to Do More with Your iOS 7 Camera

Many people have suggested restarting your iPhone, resetting the settings and even putting your iPhone in DFU Mode, which is only recommended for experienced users, but many folks having this issue have said that these fixes aren’t working for them.

This is most likely a software issue and will hopefully get fixed with the release of iOS 7.1, which is said to be launching at some point next month, but we’re not sure on a specific date just yet. We’ve been testing out the various betas of iOS 7.1 over the past few weeks and can definitely say that issues with the camera are significantly less. Apple hasn’t mentioned putting a lot of focus on the camera in iOS 7.1, but we’re guessing the company is squeezing in a handful of bug fixes to make the experience less annoying.