A fingerprint sensor could be a killer iPhone 5S feature this fall, and despite analyst claims and parts that pointed to a delay until the iPhone 6, a new Apple patent shows that Apple could be planning to place an iPhone fingerprint sensor below the screen or in the bezel of the new iPhone.

Rumors of an iPhone 5S fingerprint sensor date back to September 2012, shortly after Apple purchased security firm AuthenTec, and new sketches form a patent granted this week show off how Apple might be able to deliver enhanced iPhone security.

Patently Apple shares an Apple patent that shows a fingerprint sensor built-in to a display, but that could also make an appearance in the iPhone bezel.  The image below shows how Apple could hide the iPhone 5S fingerprint reader behind the display. 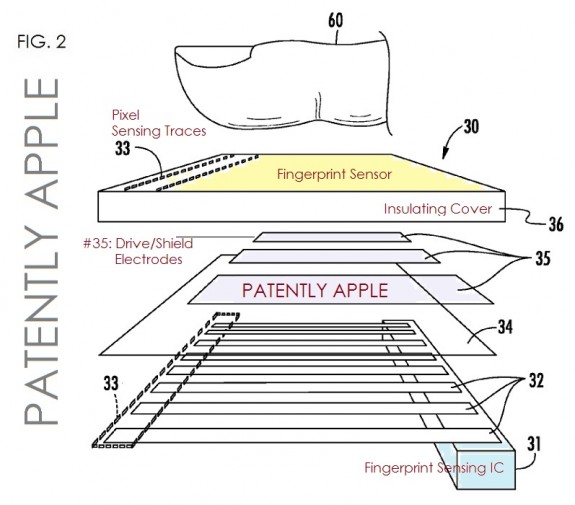 An Apple patent shows how a fingerprint sensor could exist below the iPhone 5S display.

Another alternative would be to hide the fingerprint sensor in an iPhone 5S bezel of the device. This would allow Apple to use the same external design and the same home button it currently uses, and still add better security.

The image below shows an alleged iPhone 5S complete with a logic board and battery from MacRumors. This is a small change from the iPhone 5. The logic board, the part on the right is slightly narrower, leaving more room for the battery and other components. Apple could use this extra room to build in parts of the fingerprint sensor which may sit underneath the screen or behind a bezel. While inconclusive, there appears to be small openings that could facilitate this. 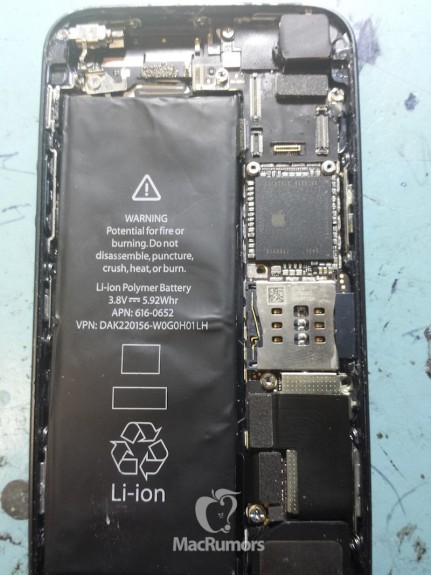 This photo allegedly shows the inside of the iPhone 5S.

As the video shows, a sensor built into the glass of the display lets users log in without swiping and unlocking. This sensor is placed near the bottom edge which allows the user to slide a finger over it to unlock the phone easily.

This type of technology would allow users to secure their phone, but that’s not all. We could see this built-in to mobile payments and with mobile online shopping. This could also tie into the iOS 7 iCloud keychain which stores passwords and credit card numbers.