The new part come by way of Czech Apple blog Letemsvetemapplem.eu which claims three alleged iPhone 5S parts are for a Czech version of the rumored iPhone 5S that could launch shortly after a U.S. iPhone 5S release.

While the alleged iPhone 5S home button part leaks show a different cable for internal connections, the physical button looks quite similar to the iPhone 5. The image above shows the newest leak, with one from March and the iPhone 5 home button.

The part is clearly very similar to the iPhone 5S, but these small changes do appear to show that Apple is re-arranging the inside of the iPhone 5S to make room for something. One possibility is that Apple is moving things around for a fingerprint sensor.

If the iPhone 5S remains the same size, and the home button opening stays at about 10mm in width, there is a chance Apple will build a sensor into the actual plastic home button that sits over the alleged part leaks. One of the thinnest fingerprint sensors measures in at 0.04 centimeters thick, and the iPhone 5 home button is .1cm thick.

This part is not from AuthenTec, which Apple purchased in 2012, but shows how thin sensors are. The image below shows the sensor next to a iPhone 5 home button from eTradeSupply.

A super thin fingerprint sensor might fit inside the plastic home button of the iPhone 5S.

Apple could use newly created space to place a fingerprint sensor flush with the glass of the iPhone 5S in the lower bezel. Other companies working on fingerprint security show several options, include mounting the sensor on the side or bottom of a device that looks a lot like an iPhone. 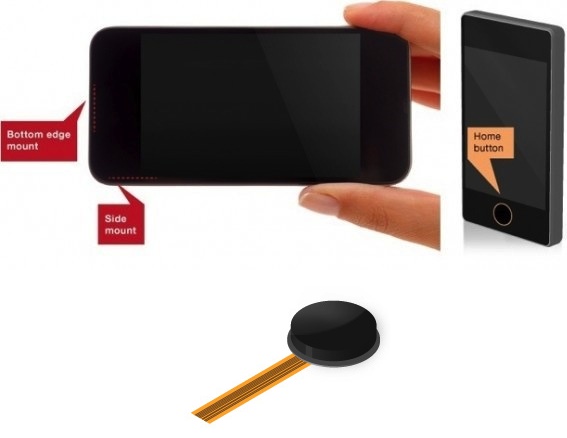 Mockup shows how and where a fingerprint reader could be part of an iPhone 5S. Images from Validity.

Considering advances in fingerprint sensor technology, these alleged iPhone 5S parts don’t rule out the possibility of an iPhone 5S with a fingerprint reader built-in later this year.

One analyst claims the feature would skip the iPhone 5S for the iPhone 6, but this note also pointed to a June launch which is no longer expected. Apple won’t likely offer the iPhone 5S until September, which could change the analysts predictions.