As soon as the latest iOS 7 beta arrived researchers downloaded the file to look for hints at what Apple is planning for iOS 7 and for the rumored iPhone 5S and discovered hints of a fingerprint sensor for the iPhone.

iOS tinkerer Hamza Sood discovered a BiometricKitUI folder and description of how an iPhone users could unlock the iPhone with a fingerprint in the iOS 7 beta 4 file, sharing the details on Twitter. 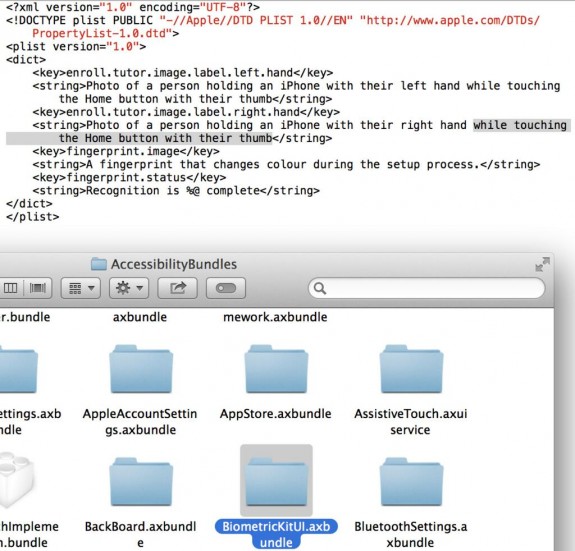 The image above shows the iOS 7 beta folder which includes details about the rumored iPhone 5S fingerprint reader. The code includes a placeholder to show an iPhone with a finger on the home screen. The text leads us to believe Apple is working on a fingerprint sensor for the iPhone 5S or iPhone 6 that will sit inside the home button, even though leaks thus far have not revealed such a sensor and a recent patent points to a fingerprint sensor in the display.

Inside the code appears to be an outline for setting up an iPhone 5S with a fingerprint reader. The code references two photos of a finger on the iPhone and a status that changes as the fingerprint recognition approaches 100%. In practice, this could look similar to the video below which shows a finger unlocking a phone with a fingerprint.

The leak does not include any additional details about how this would work, but we could see new iOS 7 features tied to fingerprints. In addition to unlocking the iPhone 5S or iPhone 6, different fingerprints could launch specific apps. This would allow users to swipe a left index finger to launch the camera or launch right into email, while the right thumb would launch to the home screen. The iOS 7 beta doesn’t show Apple working on this type of feature, but it is something we’ve seen in use on Android phone fingerprint demos.

This is the first time we’ve seen any mention of fingerprint reader support in an external iOS 7 beta, adding to claims Apple is preparing an iPhone 5S with a fingerprint reader for this fall. Even if Apple is not planning to share the details about this until an iPhone 5S launch, it makes sense to see the code appear in an iOS 7 beta 4 release. Apple is reportedly planning two more iOS 7 betas before the Gold Master and public release. By including this code now, Apple could make sure it doesn’t negatively impact existing devices.

Apple purchased AuthenTec in 2012, a security company known for mobile fingerprint technology. Previously we covered how Apple could build this into an iPhone 5S home button even though leaks indicate there is little additional space in this area.

Apple is reportedly planning the iPhone 5S release for late September, which would place an iOS 7 release soon before that and an iPhone 5S launch earlier in the month, but nothing is set in stone at this time.