After initially debuting on stage as part of Apple’s keynote unveiling of the flagship iPhone 5s, the Nike+ Move activity tracker app is now live in the App Store as a free download. Like other wearable fitness fears like the Nike+ Fuelband, the new Nike+ Move app helps track movement using motion and GPS data to encourage users to remain active and fit.

“Nike+ Move offers insight into when you move, how you move and where you move – and lets you challenge your friends to see who moves more,” Nike said in a press release.

The Move app gamifies fitness and tries to encourage users to get up and move around and compare their movements with friends.

The app takes advantage of the new M7 motion co-processor on the iPhone 5s that allows for more tracking while at the same time not taxing the battery. This frees up the more power-hungry main Apple A7 ARM-based processor to do the more intensive processing and graphics rendering work that’s required of running standard apps and games, while freeing up the motion sensing and tracking activities to the M7 co-processor that could remain on and in the background at all times. 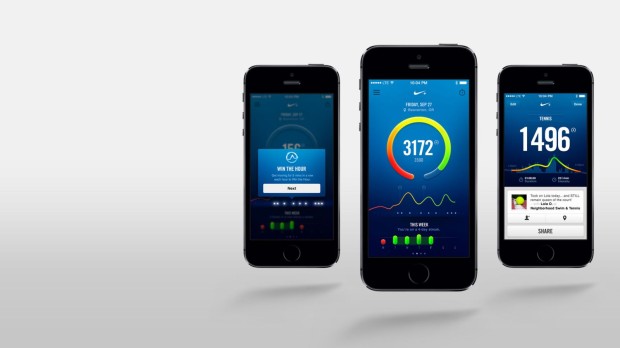 In addition to Nike, a number of other fitness apps already take advantage of the new capabilities afforded by the M7 co-processor. Those include Strava Run, WeatherRun, and others. Fitness tracking and sensing is becoming a hot market for smartphone-makers with Samsung having already embedded an always-on pedometer function into its Galaxy S4 flagship phone earlier this year and Google doing the same with its recently announced Nexus 5 smartphone manufactured by partner LG.

Nike had revealed earlier that if APIs and development is standardized across Android devices, we may see the expansion of the Nike+ hardware ecosystem, such as Fuelband sync support, to Android phones. At this time, fragmentation in how manufacturers build their hardware makes it hard for Nike to develop a single app for all platforms while guaranteeing to consumers and end users of a consistent experience. The company said it was opened to a partnership with device-makers to expand to Android, though it’s unclear when that would happen.