A new set of claimed iPhone 5S parts leaked online this week, possibly showing the home button of the iPhone 5S without a clear position for the rumored iPhone 5S fingerprint reader.

A new pair of photos claim to show parts from the rumored iPhone 5S. Leaks such as these are expected in the months leading up to an iPHone 5S release, but are not always accurate in their depiction of the upcoming iPhone or the individual part.

Still, there is a chance that these parts are for the iPhone 5S as a separate rumor this week claims Apple plans on receiving iPhone 5S components by the end of May, with the opportunity to deliver the iPhone 5S to retail channels within two weeks.

A claimed iPhone 5S home button part leaks ahead of the announcement.

In the first image we see what could be the iPhone 5S home button. The button looks similar to the iPhone 5 home button,  though it includes a longer flex cable with a new design. There does not appear to be a new spot for a fingerprint reader built into this part.

Rumors point to a built-in fingerprint reader on the iPhone 5S. KGI Securities Analyst Ming-Chi Kuo believes Apple is planning to put a “fingerprint chip under the Home button, improving security and usability,” Kuo stated in a report from early March. 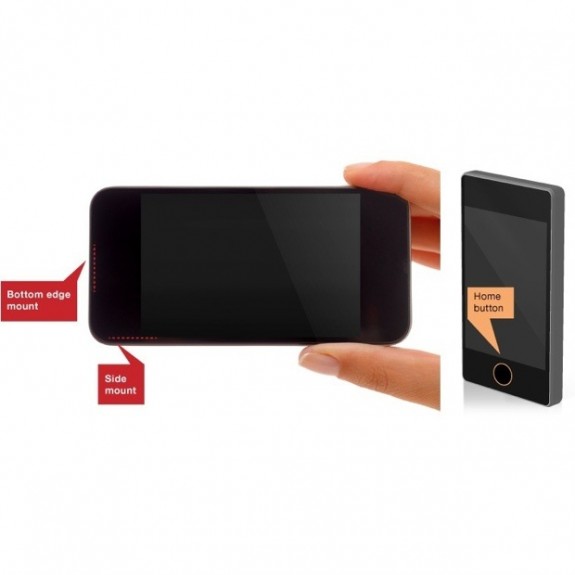 An example of how a fingerprint reader could integrate to the iPhone 5S home button.

It’s possible Apple would plan to build something like this into the actual plastic home button that sits on top of this sensor, but the details are still murky. Kuo is well connected to suppliers in Apples’s supply chain, so there is reason to believe Apple is planning to put a fingerprint reader in the iPhone 5S. Apple purchased Authentec in 2012, a company which was working on building fingerprint readers into smartphones to deliver more secure use in situations like those highlighted in the video below.

Both photos show the claimed iPhone 5S parts next to or above the iPhone 5 part for comparison sake.

The latest iPhone 5S rumors point to a fall iPhone 5S release, though there are rumors for pretty much every month from June on. The iPhone 5S will likely feature a similar design to the iPhone 5 and is reportedly bringing a killer feature that may be part of iOS 7. iPhone 5S rumors claim Apple is putting a better camera in the iPhone.

The iPhone 6 is rumored for 2014 with a new design a collection of possible features like wireless charging. We’ve already seen a number of interesting iPhone 6 concepts that imagine a device with a new home button or larger 4.8-inch display, which borrow elements from a supposed iPhone 6 prototype.