Following today’s event, Apple has now posted video of its reveal of the iPhone 5S and the iPhone 5C.

While users can’t download the video itself, they can stream the video on Apple’s website if they have Apple’s QuickTime movie player installed. Users with a second or third-generation Apple TV can also watch the video on the set top box as well.

It’s at that 8 minute mark that Apple begins detailing some of the features it showed off during its earlier reveal of iOS 7. The operating system will come equipped on every single new iPhone sold. iOS 7 includes support for third-party gaming controllers and a new user interface that will replace the staid drab look of the previous six versions of the operating system. 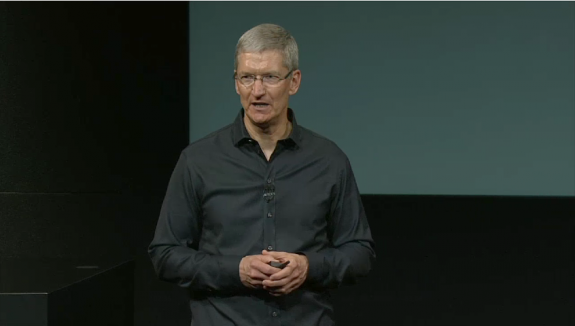 At 33:12 Schiller begins talking about the iPhone 5S, Apple’s replacement flagship device. That includes details about the device’s new Apple A7 processor at 36:16. At 46:11 Schiller begins talking about the new camera system built into the iPhone 5S. Finally at 59:10 seconds Apple details the new finger print reader/ home button that iPhone 5S owners can use to unlock their devices. Dubbed Touch ID, it allow users to place their thumb on the home button and unlock the iPhone 5S immediately, circumventing numeric passcodes.

The entire event closes with a musical performance from recording artist Elvis Costello at 71:12 playing three of his most favorite songs.