With just five days left until industry insiders believe Apple will announce new versions of the iPhone 5S and iPhone 5C, case creator Hard Candy is adding to the iPhone anticipation with a new set of cases it’s created exclusively for the devices.

The new protective shells for the devices, dubbed the HarvestCraft Slider for iPhone 5S and iPhone 5C, surfaced on Hard Candy’s website today. Although the company’s color choices are limited to white, silver, orange, red, pink, blue, black and green users will be able to accent their case with black and white color options halves should they choose to do so.

Unfortunately, the cases seem to have been pulled from Hard Candy’s website. A report from iLounge indicated that cases would cost potential iPhone 5S and iPhone 5C users $40 each. Users wouldn’t actually receive the cases until sometime in October, well after the window that industry insiders have pegged for the launch of both devices. 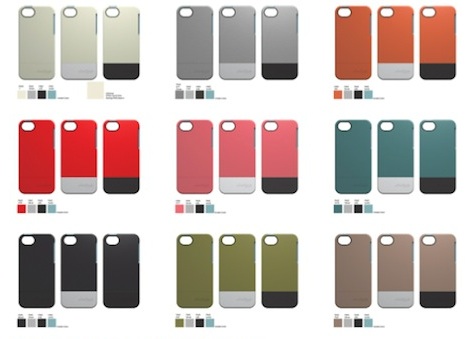 Hard candy’s HarvestCraft slider cases as captured in a screenshot by iLounge.

Although there is a tendency to treat these sort of case announcements or leaks as definitive proof that the iPhone 5S and iPhone 5C are what Apple plans to announce next week, users should also keep accessory maker’s previous track record in mind. Many outlets, particularly Hard Candy, have made bold claims about Apple’s plans for new devices in the run up to iPhone launches in the past, only to find themselves destroying thousands of cases because they had inaccurate information.

That isn’t to say that information from other sources isn’t almost definitive proof that the company will be launching the iPhone 5S at next week’s Apple event. Component leaks and Apple’s own invitation to the event do point to the imminent announcement of at least an iPhone 5S that’ll be available in different body colors.

However, until such time as Apple confirms the iPhone 5S and iPhone 5C, its best that users wait before making any pricey accessory purchases.