Apple finally sent out invitations to its heavily rumored September 10th media event in Cupertino, an event that should act the iPhone 5C and iPhone 5S launch date.

The company for weeks had been rumored to be holding an iPhone event on September 10th and today, just a day before the Samsung Galaxy Note 3 launch date, the company has issued invites for an event set to be held in San Francisco on that date.

Apple’s invitation does not confirm any devices for arrival but the invite, which was provided by The Verge, does drop at least one hint about what the company will be announcing. 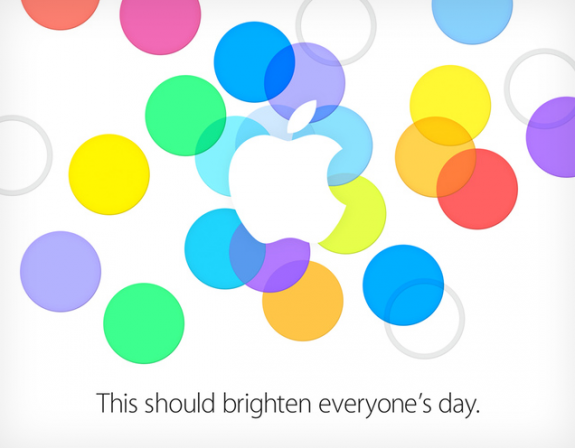 The iPhone 5S launch date is set for September 10th.

The event supposedly will be the launch pad for two iPhones, the iPhone 5S an iPhone 5 successor and the iPhone 5C, a cheaper iPhone that will come to compete with the cheap Android smartphones that have flooded the market. The invite comes with the tag line “This should brighten everyone’s day” something that seems to hint at color being on the agenda.

In the past few weeks, we’ve seen rumors of a champagne gold iPhone 5S and we’ve also seen an assortment of iPhone 5C colors emerge, something that this invite all but confirms.

Apple’s event starts promptly at 10AM PST and while there is no word on a live stream, it will more than likely come with a live stream that allows those not present at the event to watch the events unfold.

The iPhone 5S is likely going to be unveiled at the September 10th media event and it’s supposedly going to be packed with some high-end features that will be used to lure in consumers.

Rumors suggest that it will come with a design similar to the iPhone 5, an upgraded camera, a better processor, and iOS 7. The software will likely be detailed at the event and given a release date as well.

The iPhone 5S is expected to arrive on September 20th as carriers, and Apple, have seemingly blacked out several dates around September 20th. AT&T, T-Mobile and Verizon have all seen black out rumors emerge hinting at possible releases on their networks.

The iPhone 5C is expected to have a 4-inch Retina Display, dual-core processor, slim plastic design, 8MP camera, and iOS 7. It’s also expected to come with a cheap price tag with rumors suggesting around $400 off-contract.

It’s still not clear where the device fits into Apple’s iPhone lineup as rumors have suggested that it will either replace the iPhone 5 or the iPhone 4S and iPhone 4. If true, it could mean that countries like the United States will get the iPhone 5C.

Like the iPhone 5S, its release date has been rumored for September 20th.

The iPhone 5S is expected to have some unique iOS 6 features on board with rumors pointing to 120fps, slow motion video and possibly something tied into the fingerprint reader.

The iPad 5 and iPad mini 2 have been ruled out for September 10th with rumors suggesting an October launch date ahead of the holiday shopping season and Black Friday.