Over the weekend alleged iPhone 5S photos leaked on a Chinese site, after being smuggled out of the Foxconn factory in China, but a close examination shows these leaked photos are as real as fake Chinese iPhones.

The photos appeared on zol.com.cn, and were later picked up by The Times of India. The purported iPhone 5S photos look legit at a glance, showing an iPhone 5S with a size and design similar to the iPhone 5, matching up with a recent rumor. The photos appear to show an iPhone 5S in various stages of production, and the gallery shown in full on GizChina even includes a shot of workers in clean suits relaxing. 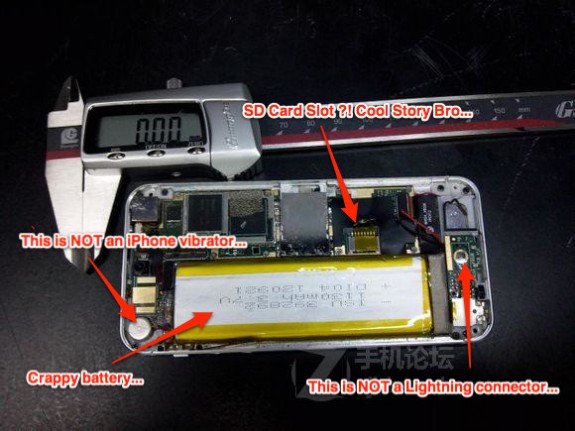 The biggest clues are the lack of a the new Lightning port, which Apple switched over to with the iPhone 5 and is betting on for the foreseeable future. The presence of an SD card slot is also a dead giveaway, as Apple relies on built-in flash memory that users cannot upgrade.

Read: How Apple Could Launch an iPhone 5 and Larger iPhone 6.