Apple is expected to expand the color palette for its fall iPhone lineup, which is speculated to consist of a high-end iPhone 5S model as the flagship of the range as well as a more budget-friendly device.

Japanese site Macotakara was able to confirm with two separate sources that the low-cost version will come in an assortment of colors, with black being reserved exclusively for the iPhone 5S flagship.

At this stage the color options rumored are still in question as different sources are leaking different colors. One of the publication’s sources claim that the low-cost device will be available in navy, gold, orange, white and gray. The second source claims a different color array that includes white, pink, green, blue and yellow-orange. 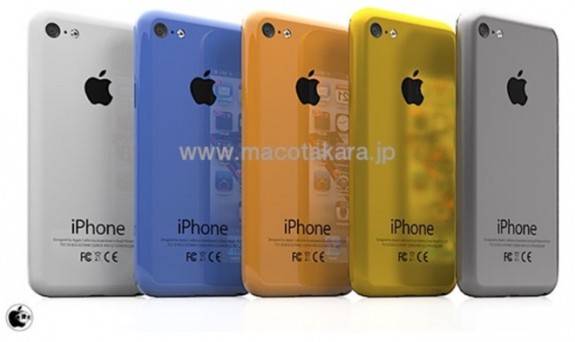 Earlier this year at the company’s earnings call, CEO Tim Cook offered hints that Apple will be announcing some exciting new products this fall. It’s been rumored for some time now that Apple would be releasing a less expensive iPhone model to compete against Android and Nokia’s cheaper range of Lumia smartphones on rival Microsoft’s Windows Phone ecosystem.

Additionally, the iPhone 5S flagship is also said to be more colorful and will expand to encompass more than three colors. Thus far, Apple has only used black and white for the iPhone flagship. Green and gold are the rumored colors for the upcoming flagship iPhone 5S.

The device is also speculated to debut with dual-LED flash for the rear camera, something that had been used on rival Android and Windows Phone handsets for some time now.

Dual-LED flash would allow images captured in the dark to be brighter. The iPhone 5S is also rumored to usher in a fingerprint scanner as well.