iPhone 5S in Stock at Stores After Lines Die Down

The iPhone 5s is in stock at several carrier and Apple Store locations across the U.S. hours after the iPhone 5s and iPhone 5c went on sale at retailers.

Long lines greeted iPhone 5s shoppers this morning after Apple did not offer any iPhone 5s pre-order, but analyst predictions of extremely limited iPhone 5s supply aren’t as bad as previously thought, at least according to scattered reports of the iPhone 5s in stock at 12:30 eastern.

Users who are looking to buy the iPhone 5s on lunch break or after work may be in luck as limited colors and storage sizes are still available, even at locations where lines wrapped around the building earlier today. 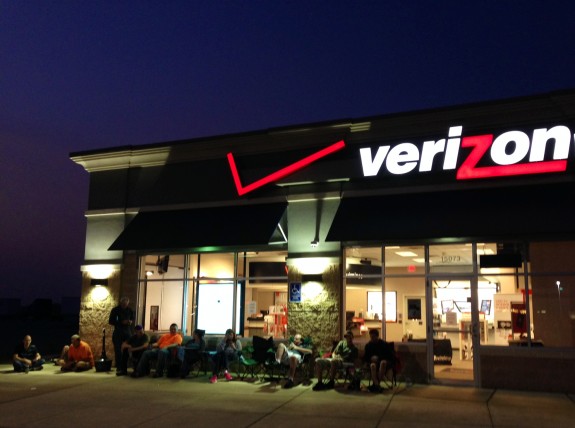 Buyers can find an iPhone 5s in stock on release day with a little luck.

If you are looking for a gold iPhone 5s, you’re out of luck. Online gold iPhone 5s orders are already almost pushed back to November and most stores did not get more than a handful of gold iPhone 5s units. One flagship Apple Store in San Francisco had less than 1 percent of their iPhone 5s stock available in gold.

While Apple is ramping up production to deliver the gold iPhone 5s faster, it will be tough to find one at a retail location on release day, or even for the first month of availability.

The silver iPhone 5s also sold out quick today, as 16GB to 64GB sizes quickly made their way out of many stores. Reports indicate this color, which is essentially the white iPhone 5s was also in short supply at carriers this morning.

A quick check of Verizon Wireless corporate locations in Ohio reveal several with the iPhone 5s in Space Gray available after the lines died down. Shoppers can find a Verizon iPhone 5s in stock in Fort Wayne, but only with 16GB of storage.

Reports on Twitter indicate the AT&T iPhone 5s is still in stock at a store in Texas in 32GB and 64GB, with no mention of color options. Additional reports indicate some Radio Shack locations are getting the iPhone 5s in stock today with late shipments.

Various other reports indicate the iPhone 5s is in stock at select retailers without the need to wait in line. It’s not clear how stock is at Apple Stores at this point.

One place iPhone 5s buyers should avoid is T-Mobile. T-Mobile carrier stores are living up the the Uncarrier name today by not carrying the iPhone 5s in any corporate owned stores in Richmond Virginia. And a reader reports the same situation for T-Mobile iPhone 5s buyers in the Dallas/Fort Worth area as well.

We don’t recommend calling a carrier or Apple Store to check if the iPhone 5s is in stock, as it could take some time before your call is answered. Many locations brought in extra staff for the day, and they are all wrapped up helping shoppers.