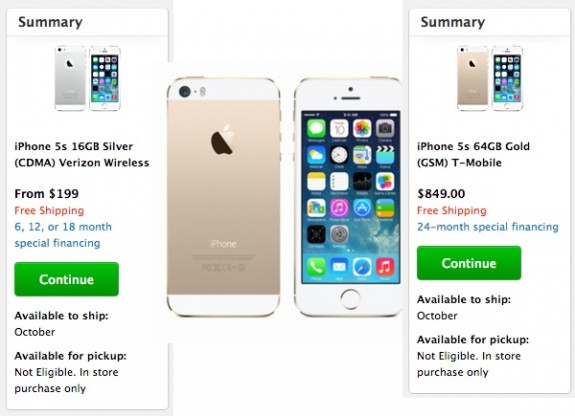 Apple no longer allows users to check to see if the iPhone 5s is in stock at a local Apple Store.

The iPhone 5s personal pickup option is missing from the iPhone Apple Store app as well as from web, which leaves ordering the iPhone 5s online as the easiest, but not fastest, way to buy the iPhone 5s.

Without the ability to check the iPhone 5s stock at a local Apple Store users will need to call and check, then hurry to an Apple Store, wait in line or drive from Apple Store to Apple Store trying to find an iPhone 5s.

For users who live hours from an Apple Store this is reason enough to look at buying an iPhone 5s from a carrier or online. Apple is making a bigger push to get buyers into an Apple Store to show off the rest of the Apple lineup, including the new iMacs, but those looking for the fastest way to get an iPhone 5s are at least now out of luck when it comes to easily finding one at an Apple Store.

On the other side of the coin, it makes sense to sell the current short supply of iPhone 5s units to customers who come in to the store first.

The iPhone 5s is a new flagship iPhone with an improved camera and the ability to take slow motion videos as well as shoot 10 photos per second. The phone features a 64-bit processor which will deliver performance gains over the iPhone 4s and iPhone 5, including but not limited to loading apps faster. Apple is selling a gold iPhone 5s for the first time, but it is in short supply and fetching a premium at auction.

The iPhone 5c is Apple’s mid-range phone which replaces the iPhone 5. Outside a colorful plastic frame offers more color choices than the 5s at a $100 discount and inside the specs and features line up closely with the iPhone 5.