According to what Nowhereelse.fr calls a reliable source, the below photo is of the official iPhone 5S user guide. The Touch ID button doesn’t look all that different than what’s found on existing iPhones, but there is a more defined ring around the button. According to Wall Street Journal sources, the iPhone 5S will feature the fingerprint scanner, but the more affordable iPhone 5C will not. 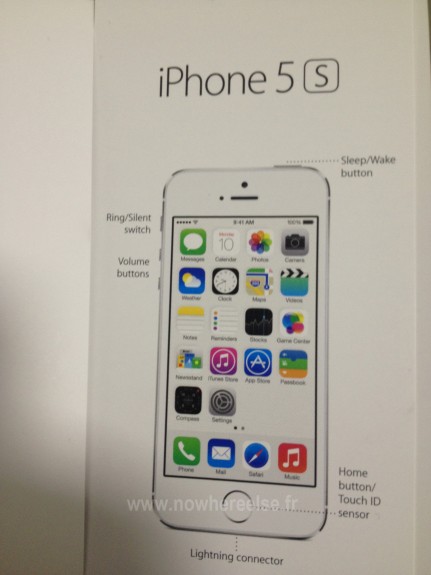 An accurate and reliable fingerprint scanner on the iPhone 5S could be a lot more important than it sounds. Too many users don’t bother to set passcode locks because of the minor inconvenience of having to tap in a four-digit passcode several times per day. Of course, it’s a very serious inconvenience to lose an iPhone without a passcode enabled. Losing an iPhone without a passcode means users can lose control of the keys to their entire digital personas. Thiefs that have full access to iPhones can even reset passwords and access personal banking info. Businesses could require employees to use the Touch ID fingerprint scanner to make sure business documents and emails don’t fall into the wrong hands. This is especially important for businesses that are heavily regulated or retain customer information.

Passcode locks aren’t very secure. Children can easily crack their parent’s four digit passcodes so they can get a little extra screen time. Employees forced to use eight digit passcodes often use repeating numbers since memorizing and entering longer passcodes can be a pain.

Passcode locks aren’t the only way smartphones are currently secured. For example, some Android phones can be unlocked using facial recognition or swiping a pattern on the lock screen. But these methods don’t guarantee that person using the phone is the owner. Some Android devices even warn owners that people that look similar to them may be able to bypass the security measure. These systems can sometimes even be fooled by a photo or video of the owner. Swipe patterns can sometimes leave tell-tale traces of oil on the display. Of course someone that wants to crack a passcode or swipe pattern can steal the codes by simply watching a phone’s owner unlock their device.

An iPhone 5S fingerprint scanner would make it much easier for users to unlock their devices quickly and securely. The new hardware also has the potential to replace passwords, such as those used to access mobile banking apps.

Apple is expected to officially unveil the new iPhones at 10 AM PDT today. The company will likely also introduce several other new products and announce when iOS 7 will be released to the general public.  According to sources we’ve spoken to at leading U.S. wireless carriers, the iPhone 5S and iPhone 5C will be available at stores starting September 20.