A new iPhone 5S video offers consumers a glimpse at what the new gold iPhone 5S will look like next to the iPhone 5 and the cheap plastic iPhone, the iPhone 5C.

Apple is expected to announce two new iPhones in the coming weeks including the premium iPhone 5S, a device that is thought to be based on the iPhone 5S’ aluminum design and the iPhone 5C, a cheaper iPhone variant made of plastic and aimed at the many cheap Android smartphones that have flooded the marketplace.

Neither device is official, however, we have seen the iPhone 5S and iPhone 5C leak ahead of time. Both devices have made appearances on camera and today, we get a glimpse at what the gold iPhone 5S, iPhone 5 and iPhone 5C look like in a lengthy video that shows off their design similarities and differences.

In the video from Macmixing, we see the champagne colored iPhone 5S matched up with a black iPhone 5 and a blue version of the iPhone 5C. Once again, we see that the iPhone 5S will come in light gold, and not a darker gold color. The front of the device is expected to be white though that isn’t shown in the video.The gold iPhone 5S also offers consumers a glimpse at the new flash that will accompany its camera.

We also see that the iPhone 5C design takes hints from the iPhone 5 and iPhone 5S though it will come in plastic and not in aluminum. The iPhone 5C is expected to arrive in numerous colors with blue just being one of the options. 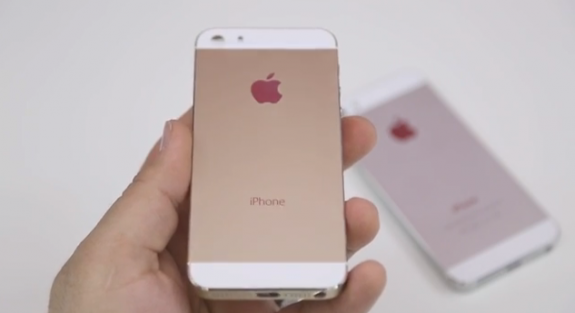 Once again we see the gold iPhone 5S on camera.

This is certainly not the first time that we’ve seen these devices leak on video but the video does reinforce what we’ve heard and seen from both the iPhone 5S and iPhone 5C.

Both iPhones are expected to make their debut on September 10th with releases rumored for September 20th. The iPhone 5C has been rumored to be replacing either the iPhone 5 or iPhone 4S on shelves. Its rumored to have a 4-inch Retina Display, Lightning port and solid camera.

The iPhone 5S on the other hand will replace the iPhone 5 as Apple’s flagship smartphone and it’s thought to have a number of significant upgrades including an improved camera, A7 processor, fingerprint reader, a 4-inch Retina Display and a design that again mimics the design that arrived with the iPhone 5 last year.