While it seems like Samsung and Apple have things locked up in the U.S., recent comments by Tim Cook illustrate just how much is still at stake in the smartphone arena.

Speaking at the Goldman Sachs Technology and Internet Conference, Tim Cook addressed the availability of the iPhone, telling attendees,

It may surprise you, but iPhone is only available to about 50-percent of the subscribers in the world.

The iPhone 5 is available in 113 countries on a large number of carriers and the Samsung Galaxy S3 is estimated to be available in 145 countries. Despite the difference, it’s clear that there is still a lot of room for growth, especially in emerging markets.

By comparison BlackBerry 10 devices will likely be available in around 50 countries this year. One report puts Windows Phone 8’s reach at 180 countries in 2012, which provides an estimate on availability for the various Windows Phone 8 devices.

Neither company can win over this large share of potential subscribers with a flagship device alone, which is why rumors point to a dual-pronged attack with a flagship phone and a more affordable offering. 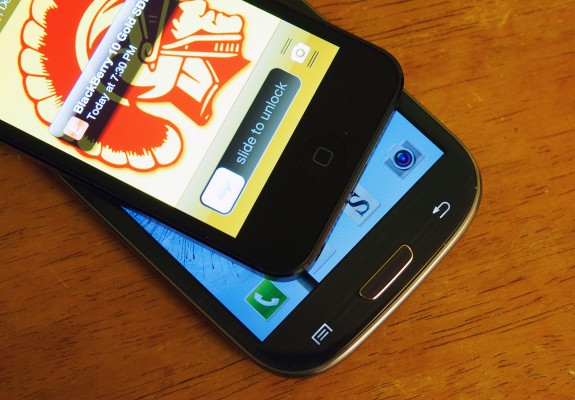 Apple and Samsung are set to battle for subscribers.

All of these numbers point to a fierce battle in 2013 when Samsung is believed to launch the Galaxy S4 and Apple is rumored to launch the iPhone 5S and possible a cheaper iPhone. Even if Samsung is content to follow the market, as a recent New York Times’ piece suggests, The company is definitely angling for more market share.

Rumors suggest that Samsung is planning to launch the Galaxy S4, as well as a family of phones that share similar characteristics. In addition to the flagship smartphone to take on the rumored iPhone 5S, Samsung is also angling for more market share with a cheaper smartphone. The Galaxy S3 mini already offers a glance at this strategy, and we could see Samsung introduce a Galaxy S4 Mini to compete with a cheaper iPhone.

While rumors suggest the iPhone 5S will arrive this summer to lead Apple’s charge against the Galaxy S4, there are many rumors and hints at a cheaper iPhone. The fastest way to gain access to this remaining group of subscribers is to release an iPhone they can afford, something which is difficult even with the current lineup as many countries do not offer cheaper subsidized phones like U.S. carriers do.

At the event, Cook said, “We are making moves to make things more affordable,” though he was quick to clarify that the doesn’t set out to make cheap products, adding, “Instead of saying how can we cheapen this iPod to get it lower, we said how can we do a great product, and we were able to do that. The same thing, but in a different concept in some ways.”

Cheap iPhones already exist in many of these countries in the form of the old iPhone that U.S. subscribers sell to a service like Gazelle. It’s likely Apple wants in on this market, and could bring a cheaper iPhone to market for $300  to $350 unsubsidized according to analysts.