iPhone with 4.8-inch Screen Rumored to Compete with Galaxy S4 in June

An iPhone with a 4.8-inch screen is rumored for a June release alongside an iPhone 5S, to provide a double-edge assault on the Samsung Galaxy S4 and HTC M7, which are rumored to arrive by this summer.

Rumors from Asia point to an iPhone with a 4.8-inch display, which China Times calls the iPhone Math, coming to carriers this Summer shortly after WWDC 2013. It’s unlikely that Apple would deviate from the current iPhone naming scheme to call a larger screen iPhone the iPhone Math.

The rumors also claims an iPhone with a 12MP camera will arrive before Christmas 2013. 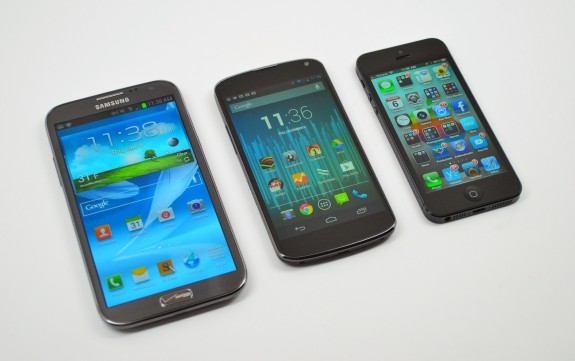 A 4.8-inch iPhone would likely be similar in size to the Nexus 4, and significantly smaller than the Galaxy Note 2.

The screen size of the iPhone Math lines up with rumors of an iPhone 6 with a 4.8-inch display. Analyst Peter Misek claims there is a prototype for a 4.8-inch iPhone 6 with a new design and no physical home button. A June iPhone 6 release doesn’t seem likely alongside the iPhone 5S as Apple typically staggers iPhone releases.

The China Times claims of a summer iPhone 5S launch line up with Ming-Chi Kuo, an analyst with KGI Securities, who has a good track record regarding Apple product launches. In Kuo’s recent note to investors there is no mention of an iPhone Math or an iPhone 6 with a 4.8-inch display in the plans for 2013.

Why Apple Could Deliver a 4.8-inch iPhone 6

The iPhone Math, or iPhone 6 as we’ll call it, could be Apple’s answer to the Galaxy S4 and HTC M7, both of which are rumored to feature screens close to 5-inches in size with a 1080P HD resolution.

The iPhone 5 was the first iPhone to get a screen size increase since Apple launched the product line. Apple did not significantly increase the resolution of the iPhone 5.

Android smartphones are in a race to deliver 1080P HD displays that are once again growing in size. The HTC M7 is rumored for a February launch with a 4.7-inch 1080P display. The latest rumors say Samsung is preparing the Galaxy S4 with a 4.99-inch 1080P HD display for a launch before June.

Apple could feel pressure to speed up a larger screen iPhone 6 to compete with Samsung and HTC this year, rather than giving the competition a year with a larger, higher resolution display.

Don’t Plan on the 4.8-inch iPhone Yet

Despite competition from larger, higher resolution smartphones from Samsung and HTC, Apple is not likely to deliver an iPhone Math or iPhone 6 with a larger 4.8-inch display this summer, certainly not alongside the iPhone 5S.

For the latest, check out Apple’s rumored 2013 lineup brought to life in concepts.