iPhone 6 app updates are already appearing on the iPhone app store as popular apps are now listed as compatible with the iPhone 6 and iPhone 6 Plus.

Apple announced the new iPhone 6 and iPhone 6 plus on September 9th and the iPhone 6 release date arrives next week with both models bringing more options than ever to iPhone users.

Developers don’t need to update apps to fit the bigger screen the same way they did for the iPhone 5 several years ago, but we’re starting to see popular iPhone games and apps receive updates that add iPhone 6 and iPhone 6 Plus compatibility.

The first iPhone 6 apps appear ahead of the release, but don’t expect the optimized apps just yet.

This morning we discovered the following iPhone 6 app updates in iTunes. There is a small list of compatible devices listed to the left of the app descriptions for these three iPhone apps.

We could not find any iPhone 6 apps with the tagline, “This app is optimized for iPhone 6.”, which is how Apple identifies apps designed to run on the iPhone 5’s 4-inch display. 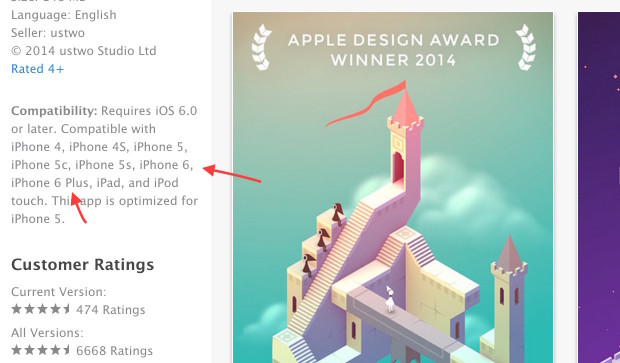 We are seeing iPhone 6 app compatibility listed in the app store.

The iPhone 6 and iOS 8 are optimized to deliver better gaming with a tool called Metal. Don’t expect the best looking apps for the new iPhones on the iPhone 6 release date next week. During the Apple event Super Evil MegaCorp previewed Vainglory — a beautiful looking new app that uses the Apple A8 processor in the iPhone 6 and iPhone 6 Plus’ power and bigger screens to deliver a stellar gaming experience.

Apple confirmed that any app that uses the full iPhone 5 or iPhone 5s display will scale up to the iPhone 6 and iPhone 6 Plus displays without using black bars. We could see developers optimize the interface and graphics for higher resolutions in the next week.

There are no release notes to indicate what the iPhone 6 app compatibility means for users. It is possible that we’ll see more information as the iPhone 6 release date arrives next week.

The iPhone 6 runs iOS 8, a free update for other iPhone and iPad owners. We already see many iOS 8 app updates hitting the App Store, and expect a deluge in the middle of next week when the iOS 8 release date arrives for all users.

It is possible that many of the iOS 8 and iPhone 6 app updates will arrive at the same time to take advantage of more access to Touch ID in third-party apps, new sharing options and a host of other iOS 8 features.

The iPhone 6 includes some exclusive iOS 8 features like Apple Pay, which will allow users to make payments by tapping the iPhone on a credit card reader. This is a mobile payment system similar to Google Wallet, but Apple hopes to push adoption in more retailers.