The iPhone 6 is still likely one iPhone away from a release, but supply chain sources are again talking about Apple pushing Samsung out of the iPhone 6 component orders.

Rumors point to an iPhone 5S this summer with minimal changes, but the iPhone 6 offers the promise of bigger changes.

In addition to rumored iPhone 6 features, the iPhone 6 may be the iPhone with the least amount of Samsung influence and parts.

Apple relies on Samsung, a bitter rival, to produce the Apple A6 and Apple A6X processors which power the iPhone 5 and iPad 4. Legal disputes and the growing rivalry between the two companies is behind a push by Apple to explore other sources for iPhone and iPad components.

An additional rumor today adds to the mounting claims that the Taiwan Semiconductor Manufacturing Company (TSMC) will handle the manufacturing of Apple’s A series processor for the iPhone 6.

According to the Korea Times, TSMC, will take over manufacture of the Apple A series processors in early 2014 with a new 20-nanometer processor. TSMC will reportedly be behind the push for the A7 processor which the publication says will release in the first part of 2013. 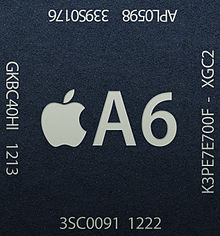 An Apple A processor.

That said, the most recent supply chain rumors claim that Apple is partnering with manufacturers to deliver an Apple A7 processor in 2014, a move that would leave the iPhone 5S and iPad 5 using an unknown processor variant.

According to EMSOne, Apple’s contract with Samsung expires this year and production will shift to TMSC. An earlier rumor pointed to Intel making a small portion of the Apple A7 chips.

At this point Apple’s patterns and the rumors are too unpredictable to piece together exactly what product names will land on these chips, but the timing indicates that the Apple A processor which arrives in 2014 would launch inside of the iPhone 6. Of course if Apple takes the advice of a former advisor and skips the iPhone 5S name, that could shift naming conventions yet again.

The iPhone 6 is pegged for 2014, and rumors suggest we might see wireless charging or a larger screen. One analyst claims an iPhone 6 prototype exists with a 4.8-inch display, no home button and a quad-core processor. If the iPhone 5S does not include a fingerprint reader, odds are the security feature will arrive in the iPhone 6.