The iPhone 6 remains the bastion of hope for Apple fans looking for a larger screen comparable to the Galaxy S4 or dominating Galaxy Note 3 and the latest reports indicate that Apple is testing iPhone displays for a new iPhone that will most likely carry an iPhone 6 name with displays as large as 6-inches.

In less than a week Apple will announce a pair of new iPhones at a special event according to months and months of rumors. The new iPhone for 2013 will reportedly come with the same 4-inch Retina Display as the iPhone 5 and will look enough like the current iPhone that cases should fit both iPhones.

iPhone 6 rumors continually point to a larger screen for the iPhone which some analysts claim would help the carrier attract more consumers in Asia and better compete with Samsung’s Galaxy S4 which offers a 5-inch screen and relies on ads to steal consumers away from Apple’s iPhone. 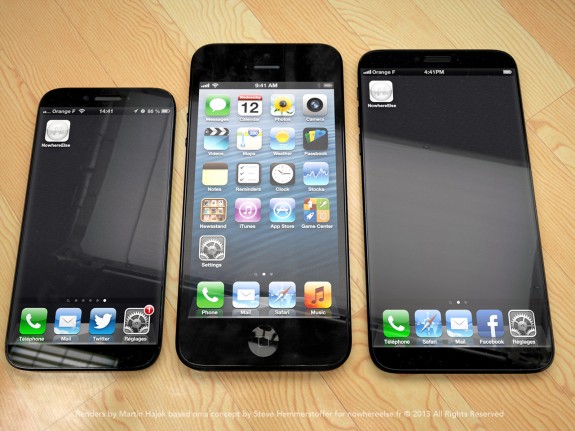 iPhone 6 concept with a 4.8-inch display via Nowhereelse.fr.

In late 2012 rumors of an iPhone 6 prototype with a 4.8-inch screen first appeared. While there are no photos of these alleged iPhone 6 prototypes this early model used a larger 4.8-inch display with a higher Resolution Retina display. Apple’s current iPhone Retina Display maxes out at 1136 x 640, which is adequate on a 4-inch display, but would not likely meet Apple’s quality demands on a larger display.

A new report in The Wall Street Journal details Apple’s quest for a larger screen iPhone, without going so far as to talk about the iPhone 6 by name. The WSJ cites people familiar with Apple’s plans stating,

“The electronics giant has begun evaluating a plan to offer iPhones with screens ranging from 4.8 inches to as high as six inches,”

These claims line up with earlier iPhone 6 leaks and represent the current range of flagship smartphones which includes the Galaxy S4 with a 4.8-inch display, Moto X at 4.7-inches and the just announced Galaxy Note 3 at 5.7-inches. It would also put an iPhone 6 with a 6-inch display in range of the Samsung Galaxy Mega which ships with a 6.3-inch display.

Comparison shows a range of smartphone screen sizes from 4-inches to 5.7-inches.

The sources claim Apple spent the last several months testing larger iPhone screen sizes, but is, “particularly interested in recent tests for a 4.8-inch screen,” according to the component suppliers working with Apple.

It would make sense for Apple to explore multiple screen sizes for the iPhone 6, or whatever the company calls a new iPhone with a larger display. Companies routinely test a variety of screen sizes for upcoming phones. Samsung reportedly tested Galaxy Note 3 screen sizes ranging from 5.5 to 6-inches.

It is not clear if Apple would offer an iPhone 6 as a single new iPhone model with a bigger screen or if the company would sell it alongside the iPhone 5S and iPhone 5C as a larger option for users that are eyeing a Galaxy S4 or Galaxy Note 3.

We’ve already discussed how the iOS 7 release lays the framework for supporting an iPhone 6 with a larger screen. We outline the reasoning in the video below, but in short the new gestures, and enhanced landscape mode line up with reports that Apple is experimenting with iPhone screen sizes.

Tim Cook, Apple CEO, previously talked down current large screen, high-resolution displays, saying they fall short of Apple’s standards, but new screen tech is on the way to phones and labs as you read this article.