A stunning new iPhone 6 concept video shows an iPhone 6 with a larger edge-to edge display and a smart home button/bezel that supports taps and gestures for easier control.

During recent conversations Apple CEO Tim Cook left the door open for an iPhone 6 with a larger display and the rumors of a higher resolution iPhone 5S point to the possibility of a bigger screen in an iPhone 6 for 2014.

These possibilities, and talk of an iPhone 6 prototype without a home button merge in a new iPhone 6 concept that actually looks like something Apple could deliver.

This iPhone 6 concept includes a full edge-to edge display, multi-touch gestures on the lower bezel for more control of iOS and apps, though the concept ventures into the unbelievable when the creator shares a take on iPhone 6 specs.

Like most concepts we see a mix of rumor and artistic license. In this iPhone 6 concept, which appeared on ConceptsiPhone, the creator shows off a full edge-to-edge display that doesn’t use any bezel on the edge of the phone. We’re not sure if Apple’s bezel saving algorithms from the iPad mini are up to handling no bezel, but if they are this is a nice looking design.

This iPhone 6 concept features a display that goes all the way to the edge.

They larger 4-inch display boasts a 754 x 1296 resolution which is lower than the rumored 1.5 million pixels for the iPhone 5S, but again, this is a concept. The display adds an extra row of icons to the home screen, but doesn’t add any moe columns.

This iPhone 6 concept looks similar to the iPhone 5 from the back, but appears without the glass inserts at the top and the bottom of the iPhone. The concept is 7.6mm thick, 58.6mm wide and 123.8mm tall. 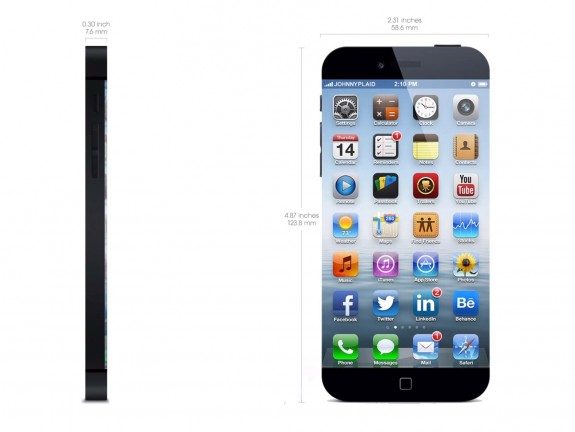 The iPhone 6 specs listed at the end of the video, such as tow Apple A7 processors, a 256GB iPhone 6 option and massive cameras aren’t likely something we can expect, even on a phone analysts don’t expect will arrive until 2014. 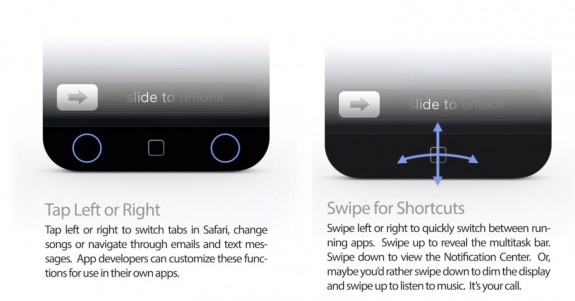 A new version of IOS and this smart bezel would offer more control.

this iPhone 6 concept uses a smart home button or smart bezel that responds to taps and gestures for control and not a physical home button. At the very least this is an interesting take on what this could enable.

All current rumors suggest the iPhone 6 will arrive in 2014, with at least two analysts pointing to the middle of 2014. Apple is reportedly working on the iPhone 5S for September according to multiple sources. The iPhone 6 is likely to be a completely redesigned iPhone, and Apple may use it to offer a larger screen size than the current 4-inch iPhone 5.