The iPhone 5s is here and to the disappointment of many, it doesn’t have a screen larger than the 4-incher found on the iPhone 5. Rumors suggest that Apple is at least testing an iPhone with a bigger screen and thanks to iPhone 6 concepts, buyers holding out for a larger-screened iPhone are getting a taste of what one might look like.

The most recent large screen iPhone rumor was unleashed just six days ahead of the iPhone 5S launch date. That rumor suggested that Apple is testing screens up to 6-inch inches, presumably for an upcoming iPhone, perhaps an iPhone 6.

The rumor didn’t come out of the blue. In late 2012, we first heard rumors of an iPhone 6 prototype with a 4.8-inch screen. No photos of these prototypes have emerged but this early model reportedly used a larger 4.8-inch display with a higher resolution Retina Display. And since then, we’ve heard analyst chatter about how a large screen iPhone could help the company compete in Asia, a key battleground, where devices like the Galaxy S4 and Galaxy Note rule.

Apple tends to use the numbered version of the iPhone, not the ‘S’ version, to introduce a brand new design. So that has lead many to speculate that 2014 and the iPhone 6 will be the year that Apple ups the ante and finally releases an iPhone with a big screen. 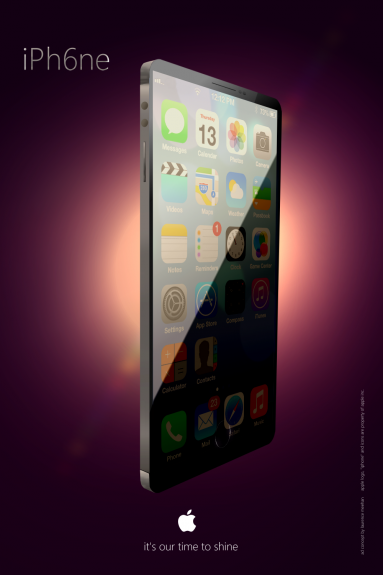 This new iPhone 6 concept shows an iPhone with a large edge-to-edge display.

Not content with waiting, designers have taken it upon themselves to dream up iPhone 6 concepts that sport large displays. We’ve seen a number of interesting ones emerge and the latest, from DeviantArt, shows an iPhone 6 with a beautiful edge-to-edge display combined with a slim metal frame.

While a large screen iPhone only exists in labs and in the dreams of designers at this point, it’s important to note that Tim Cook, Apple CEO, previously left the door open on large screen iPhones saying that while current technology falls short of Apple’s standards, the door is always open.

We’ve also discussed how the iOS 7 release for Apple’s current mobile products lays the framework for supporting an iPhone 6 with a larger screen, something that we in the video above.

For the time being, these iPhone 6 concepts are consumers best look at a larger screen iPhone. And while they are simply that, concepts, they hint at what may come from Apple next year.