A new iPhone 6 concept brings rumors of an iPhone 6 prototype with a larger display and no home button to life with a slimmer, yet still believable look for a future iPhone.

The iPhone 6 is on the minds of consumers even though we don’t expect an iPhone with a full redesign and the iPhone 6 name until 2014.

Apple is likely planning the iPhone 5S for a late summer or early fall launch, with a design that is similar to the iPhone 5. An iPhone 6 could be Apple’s next iPhone with a completely new design and this has designers working overtime to visualize what the iPhone 6 might look like.

Avni’s iPhone 6 concept shares some design styles with the iPhone 5, but other than the chamfered edges and the rounded corners we get a look at something new.

This iPhone 6 concept shares traits with the rumored iPhone 6 prototype reportedly in testing as far back as December of 2012. The iPhone 6 prototype allegedly features a 4.8-inch display and no home button, as well as a quad-core processor.

While the iPhone 6 concept video doesn’t call out the iPhone 6 display size the edge-to-edge display in Avni’s concept appears bigger than on the iPhone 5. The display features the same four by five icon rows and the dock we see on the iPhone 5, which may mean we are looking at a similar resolution Retina Display.

The larger display doesn’t appear to increase the size of the iPhone 6 concept much, as Avni calls the device smaller. Apple competitor Samsung recently announced the Samsung Galaxy S4 with a larger display than it’s predecessor, in a design that is the same size. 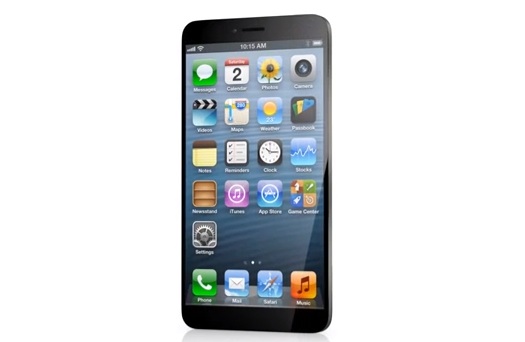 This iPhone 6 concept features a new design, larger display and no home button.

While we are seeing a move towards in-car systems that integrate Siri and phones, being able to push or hold on the entire bottom of a phone could simplify interaction while driving or performing other tasks.

The iPhone 6 is also rumored to feature wireless charging and may feature a built-in fingerprint reader if the feature does not appear in the iPhone 5S.