A new iPhone 6 concept adds a larger screen like the many iPhone 6 rumors suggest, but takes a things further with a curved display and overall design that looks like a mix between the iPhone 5s and the LG G Flex which is coming to U.S. carriers in early 2014. 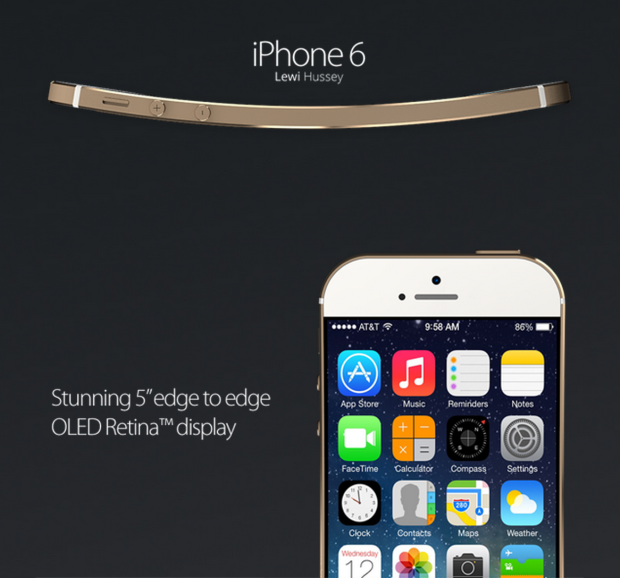 This iPhone 6 concept features a curved display and a larger 5-inch screen.

While the LG G Flex is the first flexible display on a consumer device it would not be surprising if Apple or Apple partners are working on prototypes of an iPhone with a curved display. The patent office awarded Apple a patent for an iPhone model with curved display edges and a wrap around screen in 2013, but that’s not what this new iPhone 6 concept is about.

Lewi Hussey shares an iPhone 6 concept with a curved display that looks like something consumer might actually get behind. The iPhone 6 concept shown in the video below features a 7 degree curve. This design includes a gold and white finish that looks like the metal on the iPhone 5s and would likely rule out the bending feature we see on the LG G Flex, which is able to go flat and return to the curved resting position.

Like the round of iPhone 6 rumors, this iPhone 6 concept features a larger display. Hussey includes a curved 5-inch OLED Retina Display, which is an increase of an inch over the display found on the iPhone 5s. The design of the phone is overall similar to the iPhone 5s, but this curved device is thinner at 5mm in thickness.

In addition to a curved display looking unlikely for the actual iPhone 6, it would be surprising to see Apple shave off 2mm from the iPhone’s thickness in 2014, but it is still an interesting concept to look at. Apple is normally on the tail end of adopting trending smartphone technology, waiting for others to prove the use and consumer demand for things like large displays and we could see the same thing happen with curved display technology.

Rumors suggest an iPhone 6 release is coming in mid to late 2014 with a larger screen and a new design.