The Apple iPhone 6 could be a little more Apple and a little less Samsung according to the latest insider reports, possibly stemming from the growing competition between Apple and Samsung as well as a patent dispute which lingers on months after a verdict in Apple’s favor.

Apple’s iPhone 5s release is still just a week old, but as we bought the iPhone 5s store reps were already talking up the iPhone 6, which many believe will be the name for the next iPhone.

Read: iPhone 6 Concept Hints at What May Come

The iPhone 6 could bring a larger screen, which Apple is reportedly experimenting with and will almost certainly bring the next generation Apple A8 processor. Apple upgraded the processor a full version for each iPhone since the iPhone 4S, moving up to the Samsung made Apple A7 processor in the iPhone 5s, and the latest news indicates Apple’s iPhone 6 could come with less Samsung influence. 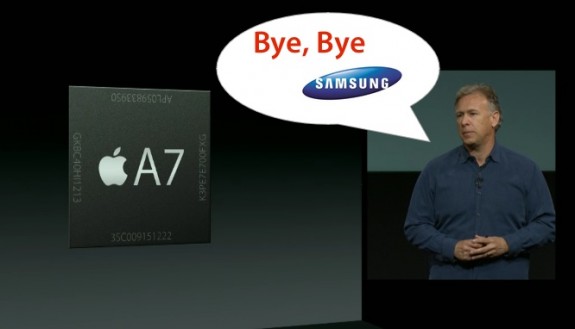 The iPhone 6 could tap the Apple A8 processor for show-stopping features, and Samsung may play a limited role.

A new report from Hankyung, a Korean news publication, claims Apple is looking to limit Samsung’s role in the Apple A8 processor for the iPhone 6 release in 2014.

According to the paper, the iPhone 6 won’t be completely Samsung free, as the publication claims the deal with TSMC will only be able to handle up to 70% of the capacity needed. The remaining chips will reportedly come from Samsung

Either way, today’s rumors is not the first one to discuss Apple cutting Samsung out of the role as the main chip supplier for the iPhone 6.

Rumors of a split between the two companies are not new as multiple reports and analysts predicted the Apple A7 processor would not come from Samsung, but from TSMC a rival chip maker.

While Apple and TSMC could team up for the iPhone 6 with an A8 processor, there is another report that Samsung could be back in Apple’s good graces for an Apple A9 processor which would likely appear in an Apple iPhone 7 in 2015.

Like the iPhone 5s, the iPhone 6 could make use of the processor to enable special features exclusive the new iPhone. The 64-bit iPhone 5s processor enables faster app loading, better in-game graphics and is a key component in the new iPhone 5s photo and video features, including selecting the best photo or photos taken during burst mode. The iPhone 5s video highlights features enabled by Apple’s A7 processor.

Rumors indicate Apple will deliver an iPhone 6 in 2014, though analysts expectations range from early in the year through summer, and specifics are difficult to narrow down.