The iPhone 6 pre-order date is here and unfortunately, iPhone 6 and iPhone 6 Plus buyers have been met with errors, delayed shipping times and an Apple Store that’s seemingly been down since the stroke of midnight.

Apple’s new iPhones both come with sleek and slim metal designs, A8 processor, upgraded cameras including Optical Image Stabilization on the iPhone 6 Plus, tons of storage options, Retina HD displays, a number of different price points, major U.S. carrier options, and Apple’s new iOS 8 operating system. Apple’s two new iPhones are expected to generate a lot of excitement, and a lot of sales, in the weeks ahead. 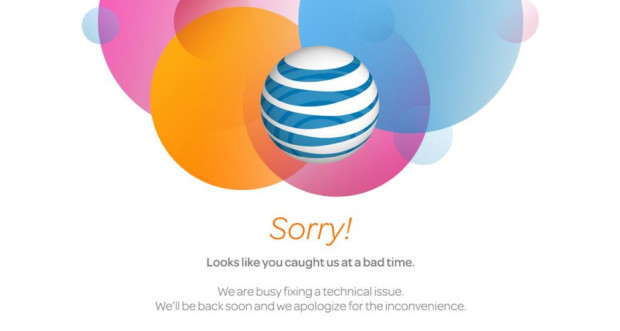 At midnight, Apple and its carriers partners in the United States started taking pre-orders for the iPhone 6 and the iPhone 6 Plus. And while some iPhone 6 buyers were able to quickly pre-order their iPhone 6 or iPhone 6 Plus, others encountered a comedy of errors on carrier websites and on the Apple Store itself.

AT&T’s website immediately greeted iPhone 6 buyers with errors including one that read:

E0034: We are experiencing a temporary system error that prevents us from retrieving your order information. Please wait a few moments and try again later.

The carrier’s site also appeared down for maintenance for many people, an error that clearly emerged due to the stress of iPhone 6 and iPhone 6 Plus pre-orders.

Sprint’s website crumbled under the heavy load of iPhone 6 pre-orders and went down completely for a few minutes as consumers tried to pre-order Apple’s new iPhone. T-Mobile’s website was, and still is, down for many prospective buyers. Verizon’s website seemed to hold up fairly well though its shipping times, like the shipping times at other carriers, has pushed out beyond the initial September 19th release date.

Worst of all, Apple’s website and Apple Store application both were down at midnight and in the minutes afterward. For many, the Apple Store remains down and inaccessible thirty minutes after the start of iPhone 6 pre-orders. 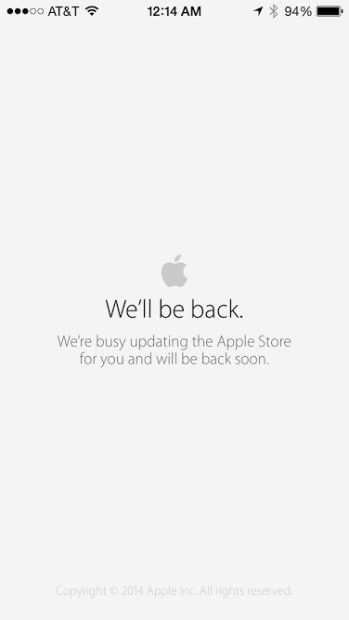 The Apple Store is still down for some.

We’re also hearing about a number of other errors beyond the website issues including orders going missing in carts and servers presenting interruptions for unknown reasons during the buying process. Some users, including several colleagues here at Gotta Be Mobile, are still not sure whether they were able to order an iPhone 6 or not.

All in all, it seems like Apple and its carriers were unprepared for the heavy load of tonight’s pre-orders and once the smoke settles, there’s a good chance that shipping times will be less than ideal for many iPhone 6 buyers. 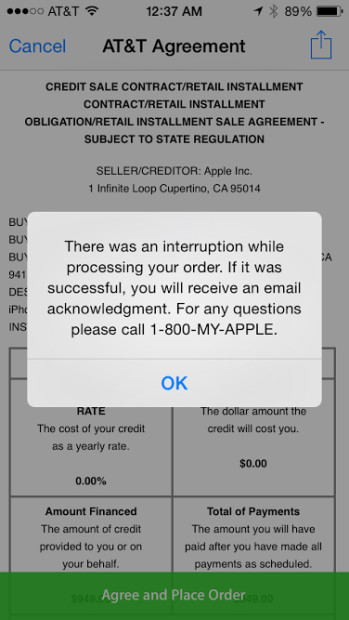 Apple’s new iPhone comes with many of the rumored iPhone 6 specs that emerged in the months before Apple’s announcement. The high-end smartphone will come with two high-resolution screen sizes, 4.7-inches and 5.5-inches, and it will sport a new A8 processor, a new camera, NFC with Apple’s new Wallet feature, and a brand new design that utilizes the company’s well known metal build quality. These are the specs that will help the iPhone compete with these top Android devices like the Galaxy Note 4, LG G3, and HTC One.

It will also come with the company’s Touch ID fingerprint sensor baked into the home button, something that was initially released with the iPhone 5s. The device will, of course, run Apple’s iOS 8 operating system, an operating system that will be released on September 17th just two days ahead of the iPhone 6 release date in the U.S. and elsewhere. iOS 8 will also be coming to Apple’s older stable of iPhones and iPads as well.