iPhone 6 rumors and leaks show a new design and multiple sizes for a 4.7-inch and a 5.5-inch iPhone 6, both of which we expect will arrive this fall, although potentially with staggered release dates. 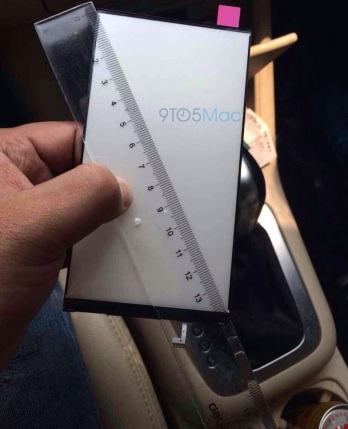 An alleged iPhone 6 screen for the 5.5-inch model.

A new photo shared by 9to5Mac shows a large screen that the source claims is for the iPhone 6. Unlike many leaks, this one includes a ruler to show the size of the screen. At nearly 14mm in the photo, this is a 5.5-inch display. Although it is difficult to see in great detail the connector looks like that found on the iPhone 5 and iPhone 5s.

The leak comes from Sonny Dickson, who also provided alleged photos of the iPhone 6 last week, and is the source for many Apple rumors ahead of the release.

This leak matches up with reports of a 5.5-inch iPhone 6 that Apple will release this fall to better compete with large Android smartphones like the LG G3, Galaxy Note 3 and the rumored Galaxy Note 4 which should arrive around the same time. So far it does not look like Apple will include a stylus like the Galaxy Note devices add to the package.

Apple’s suppliers in China are preparing to start production of the iPhone 6 according to a new report from Economic Daily News, a Taiwanese publication. The report suggests Hon Hai, better known as Foxconn will hire an additional 100,000 workers to meet demand for the iPhone 6. Pegatron is also on a hiring spree to meet demand for up to 30% of Apple’s iPhone 6 production.

It is not uncommon to see reports of new hires when production for a new iPhone is imminent. In 2013 Foxconn hired a large number of employees to work on a new iPhone in July.

This report from EDN specifically mentions 4.7-inch and a 5.5-inch iPhone 6 models. iPhone 6 production will start in July according to the sources of this report, which lines up with a fall iPhone 6 release date.

Apple recently overcame issues with a larger 5.5-inch iPhone 6 screen or battery, which allegedly hindered production of the biggest iPhone.

In addition to upsizing the iPhone 6 display, rumors suggest Apple plans to include a higher resolution of 1704 x 960 for both of the iPhone 6 models. This is not a standard HD resolution that we see on Android phones, but it will reportedly make the transition from iPhone 5s to iPhone 6 easier on developers.

Multiple reports point to a 4.7-inch iPhone 6 release date in September 2014, with a larger 5.5-inch model arriving in October or November.

Leaks suggest Apple is working on a completely new design that features more aluminum, a thinner overall smartphone, curved edges and rounded corners. The iPhone 6 thickness will reportedly measure in at 6mm to 7mm, a drop from 7.6mm on the iPhone 5s and iPhone 5.

Users may gain a more durable Touch ID sensor to go along with better Touch ID support in iOS 8, an Apple A8 processor, 1GB of RAM and a 8MP camera with larger pixels to deliver better photos in low light.