iPhone 6 rumors have been buzzing lately about a new development that could see Apple introduce a reversible USB Lightning cable with the iPhone 6 when it’s expected to launched next month. If you’re curious to see a connector like this in action, we actually got a hold of a reversible USB cable to play around with.

Recently we saw photos of what appeared to be a new reversible USB connector that could be coming with the new iPhone 6, showing a new design that allows this new connector to be used with the current USB standard, meaning that the design of USB ports themselves don’t need to change in order for this new reversible connector work. Plus, we even saw a rather sketchy video that allegedly demoed the new Lightning cable on camera. However, whether you believe that Apple will introduce a reversible Lightning cable with the iPhone 6 or not, the reversible USB connector actually already exists.

We ended up spotting reversible USB cables on Amazon, and you can grab them for around $5. They’re made by a company called Tripp Lite, which is mostly known for its surge protectors and universal power supplies, but we’ve now found out that they also make reversible USB cables.

Granted, they only come in USB 2.0 flavorings, so transfer speeds aren’t going to be that great compared to what you’re probably used to with USB 3.0, but they can still make good charging cables if you want the convenience of a reversible USB connector. Simply just plug in your normal iPhone Lightning cable into the female end of the reversible USB cable, and then plug the reversible end into your laptop in either direction. You’ll find that it plugs in both ways and your life just got that much more amazing. 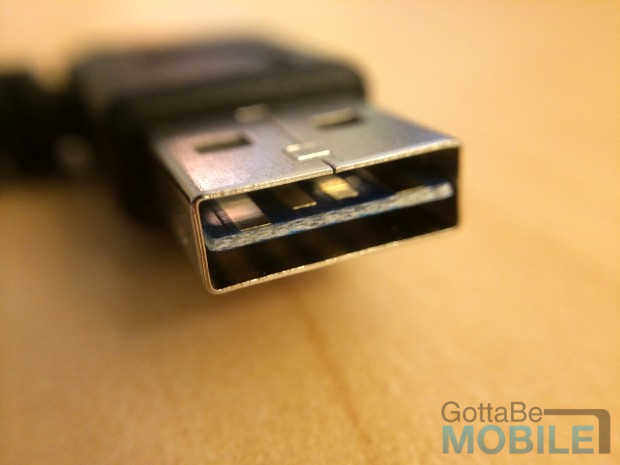 However, we are curious as to how the swapping of the pins work when you flip the connector over, seeing as to how we would think the ground and positive pins on the female port would need to swap places as well. Although, it’s clear that the pins on the male connector are wired in such a way that the top and bottom of the pins are opposite, or it could be a new chip inside of the connector that tells the plug which pins need to be ground and positive.

We’re also curious if this new design will affect the robustness of the connector in any way in the long term. iPhone users are no doubt familiar with worn out Lightning cables, so if Apple actually made this new reversible cable any tougher, we’re sure users will be grateful. 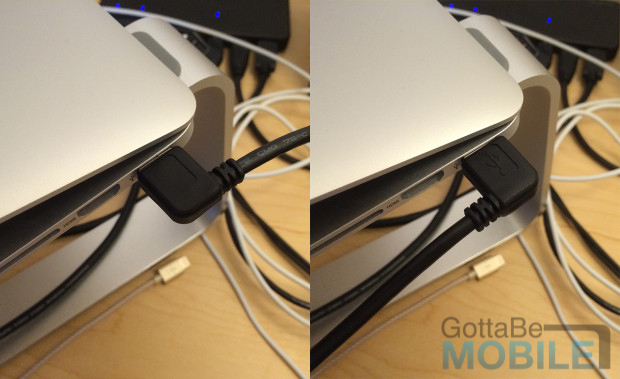 While this development has recently gained popularity over the last few days, discussions of a reversible USB connector go as far back as last year when it was revealed that the USB 3.0 Promoter Group detailed a new “Type-C” USB connection that would be reversible, although the design would call for a smaller connector overall and would oust the familiar “duck bill” design that USB is known for.

While  the USB Group might still have plans for such a design, Apple may be getting a head start with this new USB design and make it mainstream before the Type-C connector even has a chance to get off the ground. However, whether or not we’ll see a new reversible connector introduced with the iPhone 6 is up in the air. We certainly wouldn’t be surprised, but it’s also possible that Apple could still be working on the design and might be waiting to release it until the iPhone 6s in 2015.

Either way, it’s good to know that the current USB ports can support reversible connections with just a bit of a design change in the connector, and we look forward to the day when we no longer have a 50/50 chance of plugging it in wrong.