The iPhone 6 is coming this fall and it is clear that Apple is already prepping for something bigger with the iOS 8 announcement. A new iPhone 6 concept adds iOS 8 to an iPhone 6 concept with a bigger display to show what users might get this fall. We also get to see how this iPhone 6 concept compares to the Galaxy S5 and iPhone 5s.

Apple iPhone 6 rumors are already in agreement about many things like the screen size and a number of potential features. Most of the iPhone 6 leaks that showcase the design trace back to a pair of leaks which led to the creation of countless cases and the infamous iPhone 6 mock ups and dummy units that show what the iPhone 6 could look like.

These leaks are all we have to go on as far as the iPhone 6 design goes. The iOS 8 beta and announcement tells us a lot about what we can expect from the iPhone 6 this fall, including Apple’s preparation for a larger screen and new iPhone headphones that should sound incredibly better than the current default headphones and even expensive third-party headphones.

A new iPhone 6 concept showcases a design that is similar to the leaks, but not completely in line with rumors. This creation from ConceptsiPhone is showcases in a 4k video embedded below, and includes some features that many users would love to see Apple add to the iPhone 6 especially as the screen is made larger to better compete with the Samsung Galaxy S5 and HTC One M8.

The three-minute video below is available at 4k, a very high-resolution that offers an incredible detail to the concept. Although this is named an official iPhone 6 video, it is only a concept created to showcase what Apple could do with a new iPhone this year. Watch the iPhone 6 video concept to get a closer look at some features that many users would love to see on the new iPhone.

This concept shows a new iPhone with an aluminum back, which is something iPhone 6 rumors suggest Apple is actively working on. In the concept the design is not exactly like the leaked iPhone 6 models, but it does include antenna breaks like rumors suggest. An aluminum or metal phone typically needs openings to make sure it can communicate with cellular, WiFi and Bluetooth as well as a phone that is not made of all metal. We see a power button on the right side and longer volume buttons on the left, which match many iPhone 6 case leaks.

The new iPhone will very likely feature a 4.7-inch display and a larger model will come with a 5.5-inch display. This concept features a 5-inch display that includes an incredibly high 2272 x 1280 resolution. although devices like the LG G3 include 2k displays and Samsung may be planning an upgraded Galaxy S5 for the fall to take on the Galaxy S 5 we don’t expect a resolution this high. The best information suggests Apple will use a 1704 x 960 resolution display in both of the iPhone 6 screen sizes for 2014. 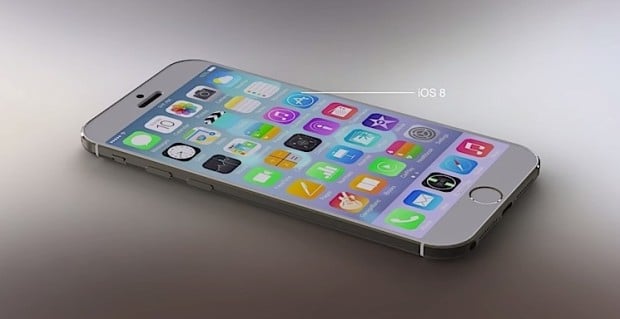 Here’s an iPhone 6 concept with iOS 8 on board.

This iPhone 6 video concept shows iOS 8 on a larger screen, with more apps on each row and on the dock thanks to added screen real estate. Apple’s iOS 8 release is planned for this fall and Apple officially announce the update on June 2nd, along with 50+ iOS 8 features. These are not all of the features we will see as Apple typically holds off on announcing many exclusive features until a new iPhone event. The real version of iOS 8 varies slightly from this iPhone 6 video concept’s version.

We see the expected 3.5mm headphone jack and Lightning port connectivity on the bottom, but this is where things start to get interesting. This new iPhone concept includes stereo speakers at the bottom of the device and another speaker at the top for a stereo experience in landscape as well. There is also an IR blaster on the top of the iPhone that lets users control a TV or home theater.

Rumors suggest an iPhone 6 will be between 6mm and 7mm thick.

Users hope Apple adds a better front facing camera, and this  concept suggests a 5MP front facing camera capable of 1080P video and 5MP selfies. On the back is a 13MP camera capable of 4k video and 240fps slow motion video. Although we expect to see a camera boost, rumors suggest an 8MP camera with bigger pixels and better performance but there is no word on 4k recording. There is also a dual LED ring flash, which is not something we expect based on current leaks. 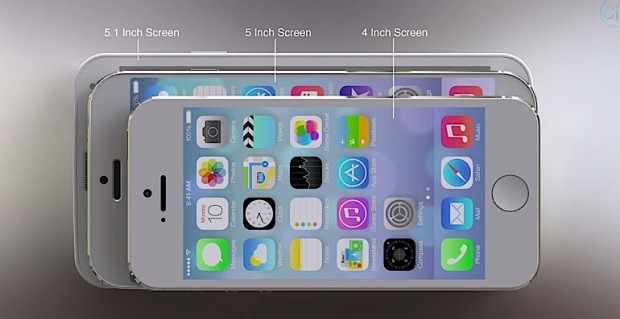 A real iPhone 6 will likely be closer in size to the iPhone 5s than the Galaxy S5.

For a full look at what to expect, check out our iPhone 6 release date and rumor roundup, with the latest information on what consumers can expect from Apple in terms of a larger iPhone this fall.