A new iPhone 6 video shows an alleged iPhone 6 case that is designed for a new iPhone that is roughly 6mm thick, a big drop from the current iPhone 5s.

While many users are still asking what the iPhone 6 will look like a collection of big leaks point to a thinner iPhone. In early April a rumor pointed to a thinner iPhone 6 that is 6.5mm to 7mm thick, but a new rumor suggests Apple is planning to deliver a new iPhone that is even thinner.

A new iPhone 6 video shows how thin a new iPhone could be with a case and an iPod touch.

Apple chopped 20% off the thickness of the iPhone during the last design upgrade and if these new leaks and rumors are true the company might be ready to shave another 20 to 25% off the thickness of the iPhone. Even if Apple is able to drop the iPhone down to 6mm thick it would not be the thinnest smartphone on the market. That honor goes to the Gionee Elife S5.5 which measures 5.5mm thick.

A collection of alleged iPhone 6 cases appeared on Nowhereelse.fr in mid-April and last week a leak from Ukranian iPhone showed dimensions of an iPhone 6 that is reportedly in use by case makers. The dimensions of this iPhone 6 model measure 67 x 138 x 6mm.

The video shows how well the 6, iPod touch fits inside this alleged iPhone 6 case. Keep in mind this case is not a confirmed leak and is not a top of the line case either. Case companies can gamble on the design of a new iPhone and produce some cases when they think they’ve nailed down the actual design of the device in order to be ready for the release date. This came back to bite a company in 2012, but that doesn’t stop other companies from working on potential iPhone 6 case. 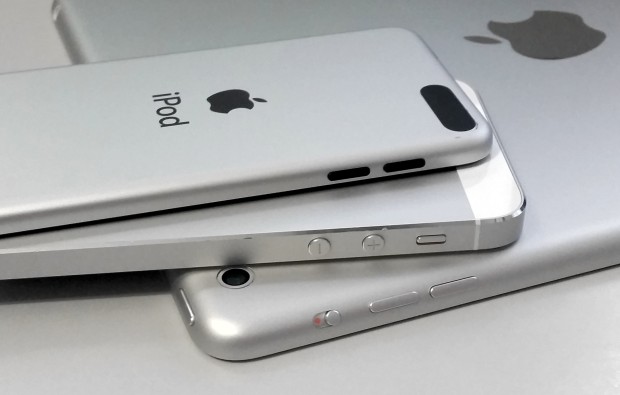 The iPhone 5s is an odd device out in terms of button design and curved edges.

As the video shows, and our photo above highlights, the iPhone 6 may be thin enough that Apple needs to redesign the buttons on the device to line up with the iPod touch and the iPad Air. If Apple does switch to a new design it would make sense to see the company keep a similar look across the iPhone, iPad and iPod touch lines.

The iPhone 5s design is primarily aluminum and glass with glass portions on the back of the phone to allow the various antennae to communicate with other devices and cell phone towers. The iPad and the iPod touch feature small window openings to facilitate communication, but the latest iPhone 6 leaks show a metal back with small lines in the back. 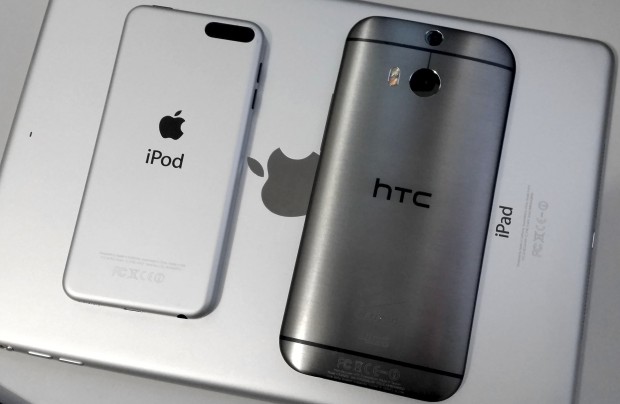 The HTC One M8 is made with mostly metal, but includes a design to allow antennae to communicate.

The overall look is similar to the HTC One M8 which is made with more metal than it’s predecessor thanks to a new design that still allows for easy communication. The device features a lines that intersect the metal on the back of the device to let make the design work, and this is something that leaks suggest we might see on the iPhone 6.

The most agreed on iPhone 6 rumors is that Apple will deliver a larger iPhone 6 display. Rumors suggest the company plans to announce a 4.7-inch iPhone 6 and a 5.5-inch iPhone 6 this year. The smaller of the two will reportedly arrive in September while the 5.5-inch will come later near the time of a Galaxy Note 4 release and the busy holiday shopping season.

The iPhone 6 may be thinner with more room for components thanks to a larger overall size.

The key to a thinner iPhone 6 is likely the larger size of a new iPhone with a bigger screen. Not only does a 4.7-inch or 5.5-inch display offer more screen real estate to look at, it means a wider and taller device to pack a thinner battery and other components inside.

Thanks to a recent leak from Ming-Chi Kuo there are a plethora of iPhone 6 details that help consumers imagine what they can expect. Kuo is an analyst with KGI Securities that is generally accurate with Apple information, predicting many iPhone 5s features ahead of the release. In his latest report Kuo outlines five important iPhone 6 predictions, listed below.

As for the actual design of the iPhone 6, some rumors suggest Apple is not completely done with colors, like on the iPhone 5c, but aluminum is the most likely material. Apple plans many iPhone release dates for the fall, with October and September the most likely candidates for a 4.7-inch iPhone 6 release date and a later release for the larger model.

When Apple delivers a new iPhone 6, no matter how thin it is and what it looks consumers will have the choice between a new iPhone and between the Galaxy S5, HTC One M8 and the LG G3 which look to offer serious competition with improved designs and features.