In a few days on March 1st the brand new HTC One M9 smartphone will be announced in Spain, and the new handset will need to compete with many top-tier devices like Samsung’s Galaxy S6, the LG G3, and even Apple’s best from last year, the iPhone 6. Here we compare the iPhone 6 from September to the new HTC One M9 based on rumors and what we know so far.

Back in March of 2014 HTC announced its best phone yet, the HTC One M8. It had plenty to offer along with dual cameras on the back, dual front facing speakers, and a crisp 5-inch 1080p HD display. The phone was one of the best in 2014, but so was the iPhone 6. Here we take a look at how HTC’s newest phone may stack up against the iPhone 6 for potential buyers.

The iPhone 6 marked some major changes for Apple. Both with a new and improved iOS 8, and the first major redesign of the iPhone in two years. The iPhone 6 and 6 Plus are both big, rounded on the sides, and look completely different from past models. At the same time, the HTC One M9 will offer a very similar experience wrapped in a familiar unibody aluminum frame. Read on for everything you’ll need to know about both of these impressive smartphones. 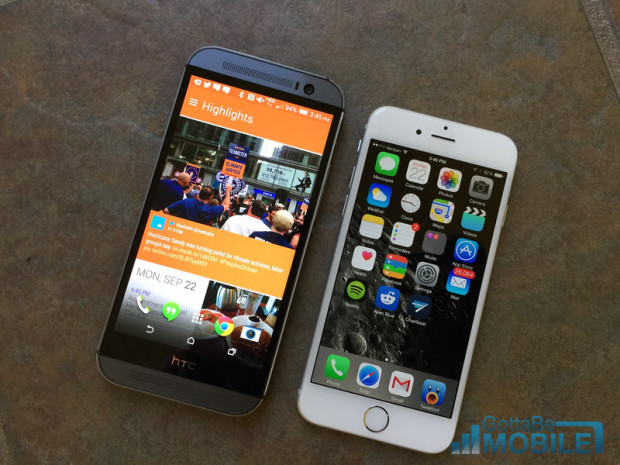 As 2015 continues buyers will have a lot of different options. From the iPhone 6 to the Samsung Galaxy S6, HTC One M9, a new LG G4, and even devices from last year that are still excellent smartphones. One on many buyers radar is HTC’s new One M9, so lets compare the two.

While we can’t make a decision for you, as everyone has different needs, wants, preferences, or budgets, we can provide you with details that could help you make a better decision before buying a phone and signing a new 2-year contract.

Which metal phone should you buy? It’s a hard choice that consumers will have to decide on if they haven’t already, as they’re both impressive phones built to the highest standards. HTC hasn’t announced the new HTC One M9 just yet, but we’ve seen countless leaks and video of the phone to know everything about it already.

The HTC One M9 looks to be very similar to the model last year, at least if rumors are accurate. That said, it has been improved in many key areas to offer up plenty of competition against Apple’s new iPhone 6. The HTC One M9 has a zero-gap unibody aluminum frame, similar plastic pieces around back for the radios, WiFi, and cell signals to be of good quality, and is a great looking phone. In 2015 the One M9 is rumored to have a two-toned design. Offering colors like silver with gold trim, like we’ve seen in leaks.

In 2014 the iPhone 6 isn’t squared off like previous models, and has a more rounded edge which is rather similar to HTC’s One M9. This makes it more comfortable to hold, but also easier to drop. And we all know how that can turn out.

Apple’s new iPhone 6 has aluminum on the entire back of the device, cutouts and slits on back are filled in with plastic for the radios and antenna’s, and plastic sides wrapping around to the face of the newly re-sized 4.7-inch display. It’s the second biggest iPhone ever, and has a sleek new design to go with it. There’s an even bigger iPhone 6 Plus with a 5.5-inch display, for those wanting something even bigger.

Both HTC and Apple have made some of the best hardware in recent years when compared to LG, Samsung, and some of the other competition, so you really can’t go wrong with either of these phones in terms of design. They are both aluminum, built extremely well, and look like premium smartphones rather than plastic slapped on a big display.

The size of the screen is one of the more important factors many buyers will take into consideration. Even though the new iPhone 6 finally has a bigger 4.7-inch screen, the HTC One M9 is already bigger. Bigger without being much bigger in terms of physical size thanks to slim bezels.

The display is a key selling point of any phone. After years of mocking Samsung for big screens, Apple has finally caved to consumer demands and released a 4.7-inch iPhone 6, and a huge 5.5-inch iPhone 6 Plus. It’s a step in the right direction, but still behind a lot of the competition unless you get the large iPhone 6 Plus.

One thing to consider between the iPhone 6 and the HTC One M9 is the screen size, and the resolution. The iPhone 6 has a 4.7-inch 1334 x 750 (720p) HD display. The HTC One M9 though, is rumored to offer a large 5-inch 1920 x 1080p Full HD IPS display. It will offer more screen real-estate, better images and crisp video, and likely be a slightly better visual experience for buyers. A few rumors suggest it could be a 2560 x 1440 Quad-HD display, and maybe 5.3-inches, so we’ll have to wait and see.

Comparing specs doesn’t mean one is better than the other, especially considering one is Android and the other runs iOS. While we won’t go into the discussion of quad-core vs dual core (or iOS vs Android for that matter) below is the detailed breakdown of what both have to offer in terms of specs, and size.

The new HTC One M9 has beefed up many key areas to make it one of the most powerful smartphones of 2015. The 8-core processor is actually two quad-cores. One powerful processor for heavy tasks, and an efficient quad-core chip for average tasks. This should improve battery life. Speaking of which, the battery is bigger this year too. The HTC One M8 was slightly taller (only a few mm) a little wider, and quite a bit heavier than the iPhone 6, and we’re expecting a very similar overall design with the One M9. However that gets you a bigger display, bigger battery, front facing speakers, and a few other things.

One big thing buyers should be aware of is internal storage. Apple never offers micro-SD cards for expandable storage, and HTC finally added a micro-SD card to the M8, and that should continue with the One M9. Meaning storage expansion is easy and affordable. You get 16/64/128GB iPhone 6 options, vs a 32GB HTC One M9 with endless storage options thanks to a micro-SD slot.

Apple’s phones have always had excellent cameras, and the iPhone 6 delivers the best experience yet. It’s still 8 megapixels, like previous years, but has been overhauled to deliver the best camera on any iPhone. That being said, HTC’s One M9 has been beefed up to a 20.7 megapixel Sony lens. They ditched the duo camera setup on back this year, and moved the 4 Ultrapixel camera to the front for better selfies and video chat.

The HTC One M9 camera should be excellent, but we’ll have to try it before we comment further. In our iPhone 6 Review the camera received a shining report, but they always do.

Leaked Render of the new HTC One M9

Apple’s TrueTone flash and 240 FPS slow-motion video capture could put it over the edge, but the One M9 is expected to have some slo-mo features, 4k video recording, and tons of HTC Eye features for a better camera experience.

Our next and very important topic is the price. The iPhone 6 is expensive, just like all versions before it. Users will be paying a premium for more storage too, something that isn’t an issue with the HTC One M9. Without getting into it too much, here’s the breakdown.

Those are the important factors, but there’s also off-contract pricing for those interested.

The HTC One M9 offers more storage for a cheaper price on contract, as well as bought outright, and by a pretty large margin. Adding a 64GB micro-SD card is rather cheap, and even a 128GB micro-SD card is cheaper than taking the huge $849 128GB iPhone 6 route. If you need storage space but are on a budget, consider the HTC One M9 over the iPhone 6.

The biggest problem for potential buyers looking for a phone today, or in the near future, is the release date. The iPhone 6 has been available for months and is readily available from all carriers, multiple stores, and more. The HTC One M9 though, is only a rumor for now (a solid rumor) and is set to be announced on March 1st.

Last year the HTC One M8 was announced and released the same day at the end of March, and many are expecting the same from HTC this year. The new HTC One M9 could be released the same day, which is Sunday March 1st, but we’ll have to wait and see. Either way, it will likely be available from all carriers in the United States within the next month or so.

Choosing between these two phones isn’t easy. They both have plenty to offer, great build materials, impressive cameras, and much more. Well, if rumors are accurate. The choice will likely come down to you being an Android vs iOS user, the price, and if you’re ready for an upgrade. We’ll update once the HTC One M9 is officially announced.