This comparison shows how the HTC One, HTC One M8 and iPhone 6 compare. Whether you can’t decide on buying the new HTC One or waiting for the iPhone 6, or you bought the HTC One and want to know what you might be able to upgrade to later this year this iPhone 6 vs HTC One video and comparison can help.

For this comparison we are using an iPhone 6 mock-up based on the most believable iPhone 6 rumors, an original HTC One and a Verizon HTC One M8, commonly referred to as the new HTC One. The HTC One devices are the same as you’ll find in any carrier store in the U.S. and the iPhone 6 offers our best look at what to expect later this year.

Learn how the iPhone 6 vs HTC One comparison shakes out.

Although some iPhone 6 specs are still up in the air, leaks and rumors offer enough information that we can easily compare the iPhone 6 vs HTC One smartphones using the details that are most likely coming to the new iPhone later this year.

The iPhone 6 vs HTC One comparison is especially interesting because HTC kicked off a push for beautiful and better Android smartphone design, and the overall size of the iPhone 6 mock-up is very similar to the HTC One released last year which also uses a 4.7-inch display.

iPhone 6 vs HTC One Video

Watch our 11-minute iPhone 6 vs HTC One video to learn how these devices compare, and then check out a more detailed look at the design, features and other areas.

iPhone 6 vs HTC One Design

the iPhone 6, HTC One and HTC One M8 all offer a premium metal design, not found on many other devices. The HTC One M8 from this year includes more metal than the original HTC One. All of these metal devices include breaks on the back to let the phone communicate with WiFi and cellular towers. 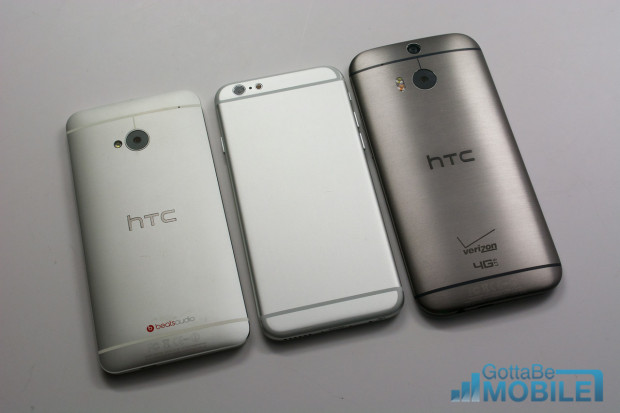 This iPhone 6 vs HTC One photo shows how the devices may compare in looks.

The lines on the iPhone 6 mock-up are rather large, but reports suggest Apple will slim them down or hide them in some fashion on the actual device.

HTC Also includes front-facing speakers on the HTC One and HTC One M8, which deliver better sound than the iPhone 5s, and possibly the iPhone 6. These speakers add to the height of the device.

The iPhone 6 mock-up and HTC One share a 4.7-inch screen while the new HTC One includes a larger 5-inch display. The trend towards larger screens is one that Apple is late to the party on, but it looks like the company may plan two models for the fall. 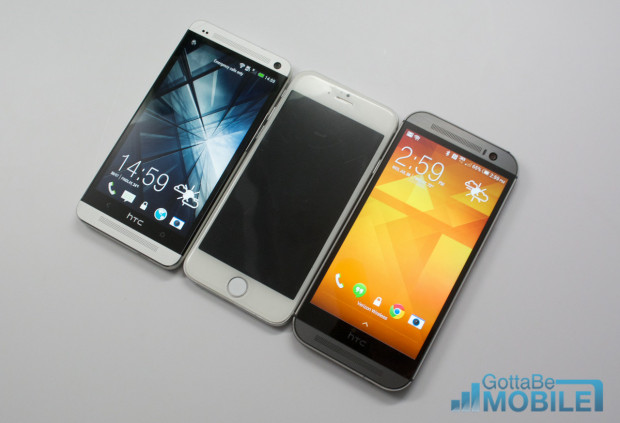 The 4.7-inch iPhone 6 matches the HTC One in size and is smaller than the new HTC One M8.

In this comparison we look at a 4.7-inch iPhone 6 mock-up, though a 5.5-inch model is rumored.

The screen specs above show the difference in screen size. While a .3-inch difference is not much, the new HTC One will offer more screen space in a slightly larger package than the iPhone 6 based on current information. 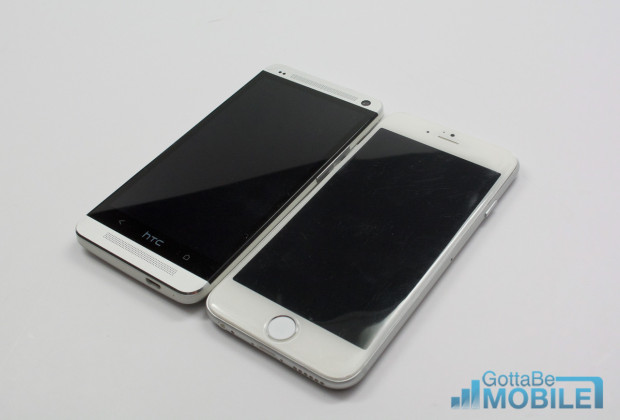 The iPhone 6 and HTC One are almost the same size.

Smartphone cameras are the go to camera for many users, and an important part of these devices. The HTC One and HTC One M8 offer an Ultrapixel camera that uses larger pixels, but produced muddy photos. The HTC One M8 includes a second camera on the back to help take photos that allow users to blur the background or foreground after taking the photo. This device also features a 5MP front-facing camera for better looking Selfies. 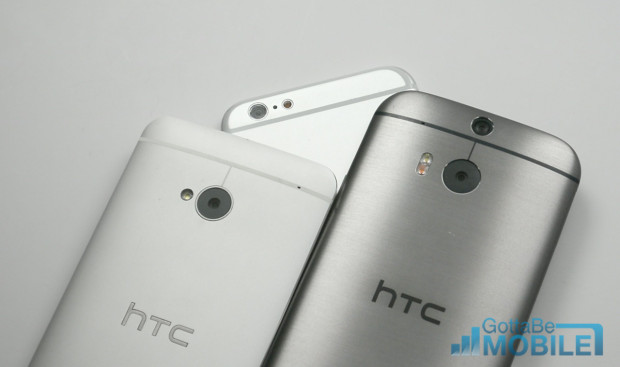 The iPhone 6 vs HTC One camera comparison shows an area where Apple may shine.

The iPhone 6 camera rumors are still taking shape, but we could see a 8MP camera with bigger pixels or a 13MP Sony sensor depending on the source. There are also some claims that Apple plans to include image stabilization to help users take better photos.

The HTC One camera app offers more features than Apple’s default camera app with HTC Zoe and highlights, but our HTC One review found faults with the camera overall. 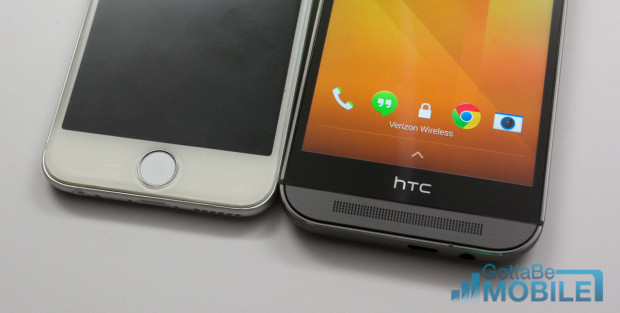 Touch ID is one feature Apple offers that HTC does not include.

When you start comparing HTC One specs vs iPhone 6 specs it’s clear that there are feature differences that users need to know about. Here are several areas that should matter to most buyers.

These iPhone 6 features are only rumors at this time, so they could change, but it is unlikely Apple plans to add remote control options based on current information. The smaller battery size is an area of interest, but it may not be as big of a difference if iOS 8 and the Apple processor and specs are more efficient.

HTC also includes a Kid Mode on the HTC One that lets users limit access when handing the phone to a child, something Apple still does not offer.

When you finally get down to it, the iPhone 6 runs iOS 8 and the HTC One devices both run Android. Apple announced iOS 8 this summer with over 50 new features and we will very likely see special iOS 8 features only on the iPhone 6.

The HTC One and HTC One M8 run Android and HTC promises that both of these devices will receive an Android L update within 90-days of the official release. This is the latest version of Android that Google is testing for a 2014 release. It includes an overhaul in looks, much like iOS 7 delivered to the iPhone last year.