The same source that delivered photos of an iPhone 6 model next to the Samsung Galaxy S5 is back with a series of photos and a video showing what the iPhone 6 vs iPhone 5s comparison could look like based on the latest rumors.

Although the final design of the new iPhone is not known, these photos offer the best look at how a 4.7-inch iPhone 6 might look like next to the iPhone 5s and iPhone 5.

It looks like Apple is sticking to the same schedule according to well sourced iPhone 6 release date rumors, and while you may not be able to buy the new 2014 iPhone for several months rumors are starting to take shape.

Over the past week a series of alleged iPhone 6 photos arrived showing a model or dummy unit that matches up with the rumors of a thinner iPhone with a larger screen and a new design. It’s impossible to know if this is exactly what the iPhone 6 design will look like, but for now it is the best guess as to what iPhone 6 vs iPhone 5s design changes may look like.

A series of seven photos show an iPhone 6 dummy unit next to the iPhone 5s, and on a video that shows the potential differences between the current iPhone and a new iPhone. The photos and video come from Italian website Macitynet.it, which offers the best look yet at how a new iPhone and the current iPhone match up. If you are trying to decide if you should buy the iPhone 5s or wait for the iPhone 6, this should help you decide if you like the increase in size.

Even if Apple is not using this design, rumors do agree on a larger display. Ming-Chi Kuo, an analyst with KGI Securities who predicted many iPhone 5s features before the release, believes that Apple is planning an iPhone 6 with a 4.7-inch display. This matches up with many other iPhone 6 rumors and leaks. Apple can shrink the bezels of the new iPhone, but a jump in size from the 4-inch display on the iPhone 5s will ultimately still result in a larger iPhone. The photo below shows what this size difference might look like. 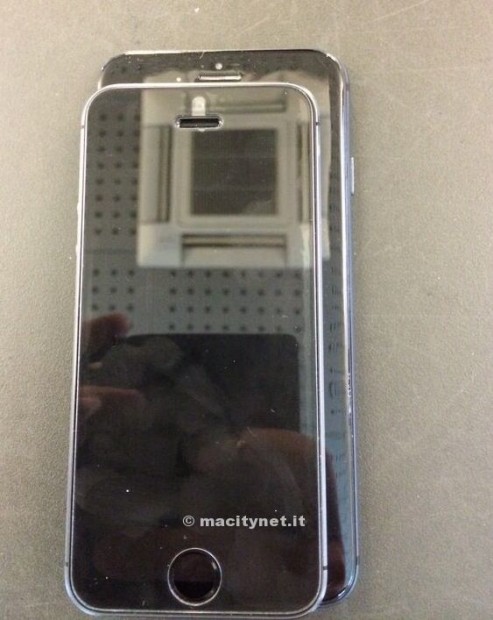 This photo shows an iPhone 6 dummy unit behind an iPhone 5s, with a difference in size.

One thing that could help convince iPhone owners and Android users to buy the iPhone 6 is a thinner design that could make one-hand use easier without the need to add any one-hand mode options to iOS 8. As part of a thinner design the iPhone 6 model in this comparison includes new volume buttons on the left side of the phone that are pill shaped. The power button is now on the right side of the iPhone so that it is easier to reach while holding the phone.

The photo below shows how much thinner an iPhone 6 may be than the iPhone 5s. The photo does not include any measurements, but rumors suggest Apple may be able to deliver a new iPhone that is up to 26% thinner than the iPhone 5s. A recent leak from Ukrainian website suggests Apple is aiming for a smartphone as thin as 6mm, but Kuo believes a 6.5 – 7mm thickness is easier for Apple to achieve. The iPhone 5 and iPhone 5s are 7.6mm thick, a drop of over 20% from the iPhone 4s. 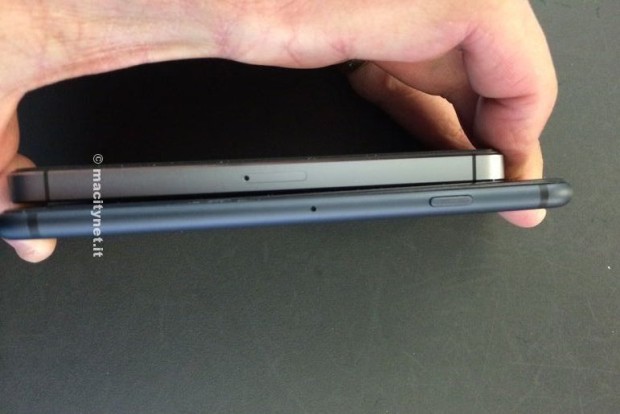 The iPhone 6 could be as much as 26% thinner than the iPhone 5s.

The bottom of the iPhone 6 dummy unit is where we get a better look at the new design with a curved edge like the iPod and iPad lines. These photos show a new speaker grill design and a single hole for the microphone. The bottom of the iPhone 5s looks like it is home to two speakers, but one if speaker and the other is for the microphone so a new design with a single hole on one side makes sense.

These photos match the most recent iPhone 6 rumors, but this far ahead of the rumored release it is possible that new rumors could dramatically change the look of the 2014 iPhone before Apple starts selling it. Most famously an early iPhone 5 design that leaked with a teardrop design convinced one company to make 50,000 cases for a phone that did not arrive. 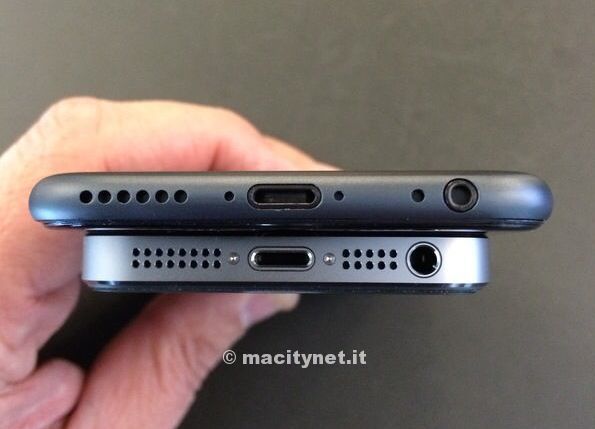 This photo shows a potential new design for the iPhone 6.

All of the believable iPhone 6 rumors claim Apple is working on a new iPhone with a larger screen, and an internal Apple document reveals the company knew the need for a bigger screen right after the iPhone 5 release. Rumors are still split on the size of the iPhone 6 display, but a 4.7-inch size is the most mentioned screen option for the flagship model. The rumors also suggest Apple is working on a 5.5-inch or larger model to compete with the Galaxy Note smartphones and other phablets.

If Apple is planning two iPhone 6 models, shoppers may not be able to buy them both on the same day. Kuo, Reuters and other reports suggest the iPhone 6 with a 5.5-inch or larger display and a 1920 x 1080 resolution may not arrive until later in the year and other reports claim Apple might even push this big screen iPhone 6 to 2015.

Thanks to a big iPhone 6 leak and other reports, we are able to share five things iPhone 6 buyers can expect from the new iPhone. Our iPhone 6 Rumor Roundup shares them in more detail, but for users that need to know the basics here is what to expect.

Apple will likely sell the iPhone 5s along side an iPhone 6 this fall. Shoppers looking for the top smartphones in 2014 will already find the HTC One M8 and the Galaxy S5 on store shelves, but there are still many other devices that will compete with an iPhone 6 later this year.