iPhone 6 vs New Moto X: What Buyers Need to Know

Last week Motorola announced four brand new devices they’ve been working on, one being the all-new Moto X for 2014. Originally rumored as the Moto X+1 or Moto X2, it’ll simply be know as the Moto X. A few days later though, Apple announced the new iPhone 6 and iPhone 6 Plus, and buyers will want to know the difference between both new phones.

Buyers have more choices now than ever before, especially now that all major Android manufacturers have released flagship phones this year, and the new iPhone 6 has arrived. Making a decision is hard, and below are a few details you’ll want to know.

The new iPhone 6 is the biggest change to the iPhone in two years. It has a bigger display coming at 4.7-inches or 5.5-inches, and runs the completely overhauled iOS 8. The new Moto X though, is no slouch either and is bigger and better than ever before. Both phones have plenty to offer, and you’ll want to read all the details below before buying one vs the other, especially because they’ll both be available before the end of the month. 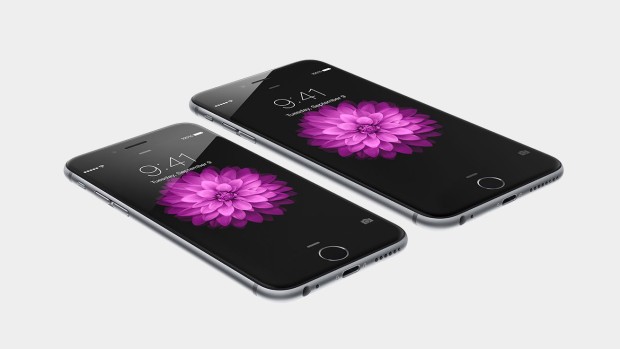 The iPhone 6 is shipping now after pre-orders went up late last week, and it officially launches on September 19th. Today the Moto X pre-order page finally went live, and buyers can purchase one now, and receive it within the next 10 days or so. While most iPhone 6 buyers will get their hands on that new phone first, you may want to wait and see what reviews have to say about it, and see how the Moto X compares before leaping for the Apple phones with bigger displays.

The original Moto X from 2013 had a 4.7-inch 720p HD display, which is the same size as the new iPhone 6. However, the Moto X for 2014 has an even bigger 5.2-inch 1080p HD display, sitting perfectly between the iPhone 6, and the bigger 5.5-inch iPhone 6 Plus. Meaning if you’re torn between the two sizes, the Moto X may be the perfect solution. 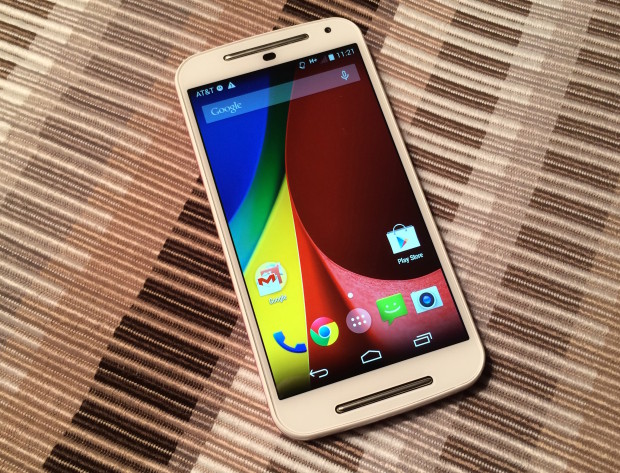 Moto has kept the bezels quite small, leaving the front covered in as little bezel as possible and some new front facing speakers. The iPhone 6 has the dedicated home button with Touch ID, and all the sensors on top, making it a rather tall device. The size difference is minimal, even though the screen is much bigger and higher resolution on the Moto X.

That said, Apple has some of the best and brightest displays on the market. The new Moto X is certainly one of the better panels we’ve tested to date, so we’ll need to compare them side by side for a full breakdown and comparison.

The overall design, look, and feel of the new Moto X is very similar to last years model, and is all about offering customization. Apple’s new iPhone 6 is bigger, has a slightly different look, and is extremely thin. That said, it comes in three color options and that’s about it. The Moto X comes over 25 different options, but more on that below. 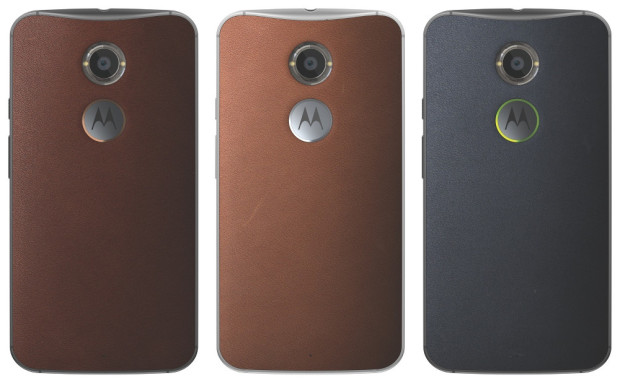 The iPhone 6 is wrapped in a lightweight aluminum shell with separations for radios and WiFi signals for a good connection, and is one of the best looking phones to date. Apple is strict when it comes to design, as we all know, but the new Moto X isn’t to bad either. The front fascia is made of plastic and there’s an aluminum ring for protection around the sides, and the back can be plastic, wood, or even genuine leather. 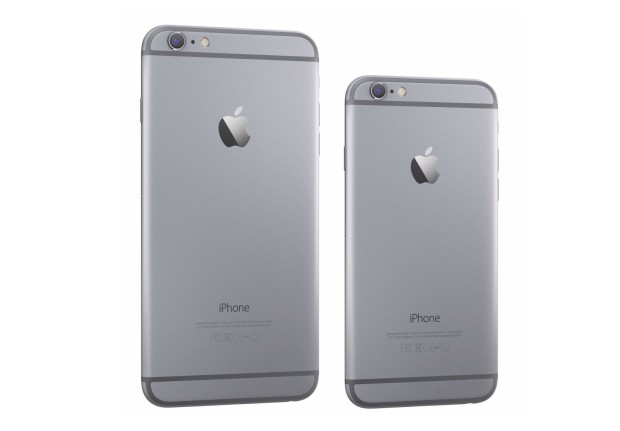 The Moto X has tons of customization from colors, accents, engravings, and even wood, which could sway buyers that way. Apple doesn’t do such things, so if you want a one-of-a-kind smartphone, the new Moto X is the way to go.

In the end though, it isn’t just about customization. It’s about features, specs, Apple Pay, the camera, and much much more. Everyone has different needs, wants, and budget, so you’ll have to choose for yourself.

We know specs aren’t everything, especially when comparing two different operating systems that work very differently. That being said, here’s the numbers and size details for those interested.

Obviously there are a lot of differences, but you’ll notice the size isn’t too different, even though the screen sizes are. Apple doesn’t share all the battery details and such, but these two devices are more similar than many would expect.

Without getting into it too much, the iPhone 6 camera is supposed to be excellent. It is still 8 megapixels, but has a new focus system, 5-point lens, and an improved flash to really make photos look impressive. Add in 240 fps slow-motion video recording and more, and you’ll love the camera on the new iPhone 6. 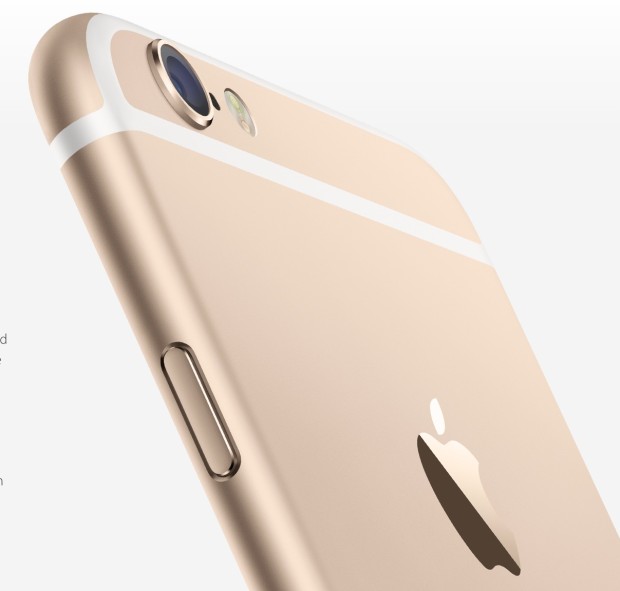 The Moto X however, has a 13 megapixel camera. That being said, the 10 megapixel camera on the original wasn’t as good as the iPhone 5S, so it’s hard to put into perspective the numbers. There’s a lot more to the camera than the megapixel count, and Apple knows this. They’ve offered some of the best cameras around for years, and we’ll compare both once we get our hands on the new iPhone 6.

Last but not least is the price. While we could go on an on about software, features, front facing speakers, ring LED flash options, or Android vs Apple, most already know what to expect when looking for a new phone. However, price is an extremely important aspect here.

The iPhone 6 though, has 16GB, 64GB, and a brand new 128GB option, but they come at a hefty price tag. The prices below are with a new 2-year contract.

Users can also buy the phone outright, and not sign a contract. That is $499 for the Moto X with 16GB of storage, but this is how Apple’s lineup looks.

Users will be paying $150 more for the iPhone 6. A device with a smaller lower resolution display, a camera which may or may not be better, and arguably worse battery life. That being said, Apple devices always come at a premium, are built to last, and will surely get updates at a frequent pace.

If you’re looking to buy an iPhone 6 outright, you know what you’re in for already, so there isn’t much more we need to say.

Debating Android over iOS isn’t something we’re interested in doing these days, as everyone has a different point of view. Instead, the details above share the few differences regarding size, screen size and quality, and price regarding these two phones. If you’re an iPhone owner looking to try something new, Motorola offers a great display, simple software, and tons of hands-free voice controls with its Moto X.

On the flipside, if you’ve been waiting to try an iPhone but didn’t want a small screen, now is the perfect time to make the switch. I loved the Moto X last year, but it certainly could be better in a few areas. Those have been included in this new model, but the iPhone 6 surely will make most owners very happy.

There is a lot of excitement around the new iPhone 6, but don’t get one just because of the bigger screen. Check out what iOS has to offer, Apple Pay, and everything else before buying a new device, then try a new Moto X from AT&T in the next week or so once it arrives.