iPhone Alarm Makes You Do Logic Puzzles to Wake Up

iPhone app Freaky Alarm forces users to perform specific tasks before it will turn the alarm off.

To force users to wake up Freaky Alarm can make them complete logic puzzles, forcing them to think beyond just pressing a button. The app has a total of eight different logic puzzles to choose from, which isn’t very many, but is theoretically enough to keep it from being repetitive after just a few days.

Assuming the user doesn’t already know the puzzles, they are likely enough to force the user awake for at least two weeks or so. 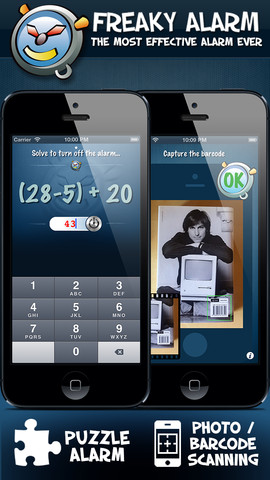 The latest update to Freaky Alarm also added a new photo feature. The feature forces users to take a photo or scan a barcode with their iPhone before the alarm will turn off. The user sets the object to photograph before setting the alarm, and they have to take the same photo when they wake up to turn off the alarm.

The photo feature seems more useful than the logic puzzle because it can force users to get out of bed. As long as users set a photo they can’t see from their bed, they’ll have to get up before the alarm will shut off. Anyone can do logic puzzles from bed, which could lead to them falling back asleep.

Freaky Alarm also includes statistics to show users how efficient they are at waking up. With the statistics users can see how long it takes them to shut off the alarm every day. Theoretically users can use that data to get a better night’s sleep.

The statistics also come complete with badges and social network integration so users can show their friends how long it takes them to wake up every morning.

Freaky Alarm is currently available in the iOS App Store for $1.99. It might be the perfect app for users who have trouble adjusting to daylight savings time.