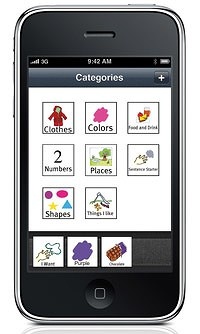 I’ve long argued that pen and touch input is ideal for bridging language barriers, but an app called Grace takes it a step further by enabling autistic children to communicate with pictures on the iPhone, iPad, and iPod touch.

Put simply, Grace is a digital version of the Picture Exchange Communication System. PECS was developed to give autistic and other special needs children with verbal problems a way to communication without using words. Rather, they arrange pictures in sequence to form sentences. The system is brilliant in its simplicity, but it suffers from the flaw of requiring a large number of pictures. Thanks to Grace, instead of flipping through a thick binder and sorting through laminated tiles, there’s a digital solution easily accessed through an iPad, iPhone or iPod touch.

The app was designed by Lisa Domican, a mother of two autistic children in Ireland who blogs about her experiences on Hammiesblog. Each picture is tested by her daughter Grace (hence the app’s name) to determine if it is easily recognized. Furthermore, users can add their own photos and images to expand and/or tailor the vocabulary to fit their needs. The app is currently going through a trial run at Grace’s school with many of her fellow special needs students using donated, second-hand iPhones.

The app is not cheap, priced at US$37.99, but you have to weigh that against the price of printing, cutting, and laminating paper picture tiles, and assembling and carrying them in a massive binder, not to mention the vast time-savings it offers compared to flipping through that binder.

Check out theage.com.au for a full report, and you can also show your support at Hammiesblog. As much as we love the frivolity of mobile technology, it’s always great to see it used for things that are really important.