We all know that music ID apps like Shazam and Soundhound can tell us what song is playing by simply “listening” to a few seconds of the track. What you may not know is that there’s an app that can do the same for television as well. That app is IntoNow – and it does its job quite well. 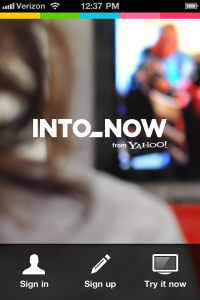 The app gives you around 10 shows to tag without creating an account, but after that you’re prompted to sign up before discovering any more. Registering is quick and free.

After identifying the sound bite, it will tell you the name of the show, the season, the episode, and a brief plot description. At first, we thought it might use the iPhone’s camera in conjunction with the microphone to determine the show and episode, but it only needs audio.

How well does it work? It got most shows we tried, ranging from popular primetime network episodes to daytime children’s programs to 80’s action serials. The only shows it didn’t get were obscure decade-old programs from Netflix that you wouldn’t likely watch anyway (we wanted to see what IntoNow’s limits were). 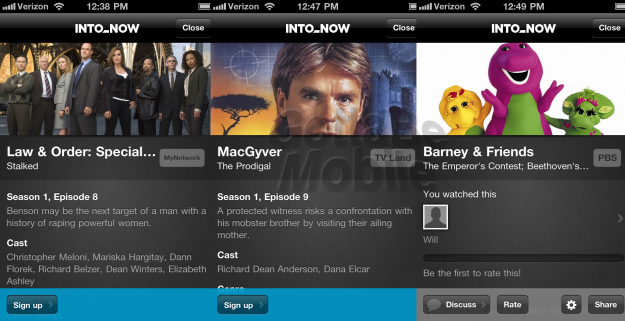 IntoNow also has a social element, which allows you to share your ID’d programs on Facebook or Twitter. You can also add IntoNow friends, rate episodes, leave comments, and start discussions. You can even be alerted to previously-selected programs that are currently running on live TV. This all adds up to yet another social network that nobody is really asking for, but for those who are TV junkies – with lots of like-minded friends – this could have a niche.

In fact, IntoNow is actually categorized in the AppStore as a social networking app. They’re pushing the social element so hard that there doesn’t appear to be a way to keep your tagged shows private. Not that TV watching privacy is an issue for most, but when you tag an episode, do you really like having anyone in the world able to see it? The lack of an option to disable this speaks to the direction Yahoo! (apparently the parent company here) is trying to take this. Despite the potential usefulness of the show tagging, the force-fed social element is borderline nauseating.

Still, for those who are content to ignore (or even use and enjoy) the social aspects, the episode ID service sparks the same kind of “they can do that???” reaction that many of us had two or three years ago after first seeing Shazam in action:

IntoNow is a free iPhone app. It does not have an iPad-optimized version, but jailbreakers can use RetinaPad to make it look very nice scaled-up on an iPad.

Whether the social element turns you on or off, being able to identify all but the most obscure television programs is yet another tool that our phones and tablets are making possible. Welcome to the mobile future – where you’ll always know exactly what episode of MacGyver you’re watching.