With WWDC and the inevitable unveil of iOS 6 coming next week now is the perfect time to drool over concept videos of what some designers think iOS should look like.

The latest concept comes from designer Joost van der Ree by way of MacStories, who has some innovative ideas on how to improve iOS. Van der Ree saw four areas of the OS Apple could improve: multitasking, Notification Center, app badges, and app previews.

For multitasking Van der Ree used an idea that other concept designers picked up: Mission Control. To activate Mission Control users swipe up from the bottom of the screen, and it brings up a collection of screenshots from apps the user recently opened.

Only four apps appear on screen at once, but users can scroll down in the list to see more. The best part of the idea is tabs in apps like Safari stack like cards in the most recent version of WebOS. We’re not sure how users would force quit apps in this view without tapping and holding, but it’s a nice idea.

Like multitasking, Van der Ree hides Notification Center behind the homescreen instead of making a shade that pulls down over it. It’s enabled the same way as the current version (swipe from the top of the screen) and has similar features, but looks a bit nicer. We like to imagine that it uses swipes to dismiss notifications instead of tiny circles nobody can reliably tap every time. 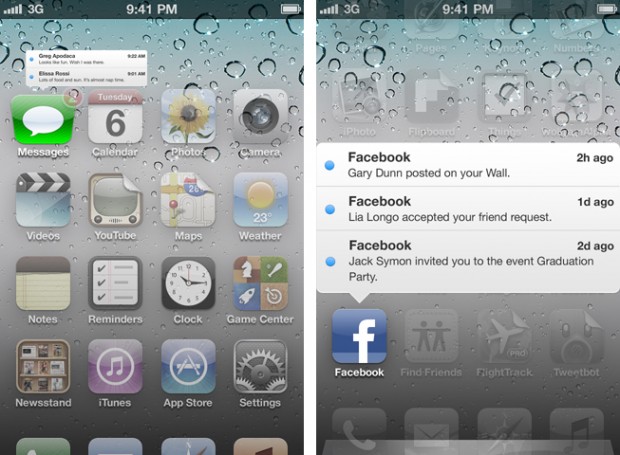 The dynamic notifications badges in the video are possibly the best concept idea we’ve seen for iOS. With dynamic badges users just need to tap and pull down the badge on the app to show the notifications. Users would no longer have to go into the Notification Center or the app to see what the app is trying to tell them.

We hope Apple does something like this in some version of iOS. Or, if Apple can’t do it, we hope somebody will make a jailbreak version. Notifications like these are a good enough reason to jailbreak an iPhone.

The last feature in the concept video is what Ven der Ree calls “flipcons.” The basic concept is users swipe down on app icons to bring up a preview of the app. It’s especially useful for apps like Flipboard, Reeder, Tweetbot, or any other app that has constantly updating information. The concept replaces the need for widgets while still giving users quick access to information.

Flipcons wouldn’t completely replace widgets for Android users but it would be a great compromise between Android-style widgets and the iOS-style grid of apps.