Mobile gaming is huge, and with the powerful new iPad, we’re going to see even better games coming to our tablets, and arriving on our iPhones, iPods and Android smartphones.

According to a new survey of 15,000 users by MocoSpace, an entertainment website, your home is the most popular place to play mobile games.

As I looked over at my wife’ playing Draw Something, which has pulled in $250,000 a day and was just purchased for $200 million, these numbers don’t surprise me. 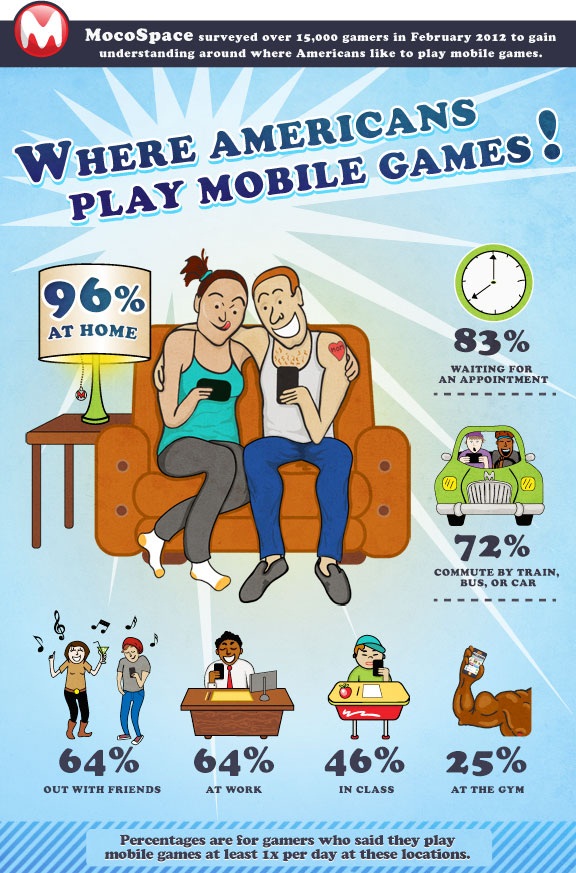 Here are the most popular places to play mobile games.

Even more revealing is where these games are played at home. No more are we curling up with books and calling it a night like Dick Van Dyke, but instead we are playing games til our eyelids close. The bedroom (53%) is the top place to play games, with the living room (41%) following as a close second. We already know that we love to use our phones while watching TV.

Surprisingly, the bathroom was only claimed as a room for gaming by 5% of respondents. Something tells me most of these respondents were too embarrassed to admit to stall surfing.

Bedroom gaming isn’t without a cost. In addition to writing for GottaBeMobile, Kevin Purcell, is a pastor and marriage counselor. He shares the following insight into the effect of bedroom gaming on marriage.

“As a minister I’ve done a fair amount of marriage counseling. Many marriages struggle due to lack of communication and not enough sex. Guess where we do those two things the most. Sex is obvious, but couples communicate deeply more in bed than anywhere else.

It makes sense since many never see one another till they go to bed at night. I used to ask couples how much they watch TV or read at night in bed instead of talking or getting intimate. I guess now I’ll have to add Angry Birds and Real Racing HD to the list.”

The most popular games are Social Games (62%) which include games like Words With Friends and Draw Something, where you play against your friends. Action games came in second with 53% and Puzzle games pulled third with 40%.

Where do you game? Are you playing your Xbox 360, Wii or PS3 less now that you have an iPhone, iPad or Android?