Corning, which has become a household name among smartphone enthusiasts with its Gorilla Glass and a supplier of the chemically strengthened glass for Apple’s iPhone, is now saying that the flexible and bendable Willow glass is still some three years away from mass market viability. Corning’s Willow glass with its flexible properties could open the doors to new form factors for existing products and even new product categories.

One such example would be a curved glass panel that would encase Apple’s rumored iWatch. Another example, which would require the use of flexible OLED displays, would mean that users could even roll up their tablets in a tube for easy portability rather than carrying a 10-inch slab of hardened glass around with them. How about an e-reader that users can roll up like a newspaper? Or a tablet that can fold on itself like a magazine or paperback book? This would open the doors to other forms of wearable computing technologies as well. 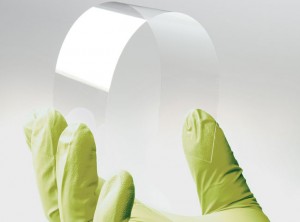 Theoretically, though, the glass display on an iWatch may not need to constantly bend and shift its shape. As such, it could appear much sooner than the 3-year projection for Willow glass, but a rollable iPad may have to wait.

In a report on Bloomberg, Corning president James Clappin says that manufacturers have not fully exploited all the advantages of Willow glass yet. This would take time, and Clappin says it is beginning to educate its partners on how to use the technology.

“People are not accustomed to glass you roll up,” Clappin said after an event marking the opening an $800 million factory for liquid-crystal-display glass. “The ability of people to take it and use it to make a product is limited.”

But that doesn’t mean that we won’t see Willow glass in products as early as this year. Clappin says that we’ll begin to see Willow appearing in some simple products soon, including as a flexible barrier for solar panels and as a thin film behind some touch panels. The company had hoped Willow would begin showing up in consumer electronics by this year after having sent out samples to manufacturers of HDTVs, tablets, and smartphones last June.

Another bendable technology that may complement flexible Willow glass would be stretchable and foldable battery technologies.