iPhone OS 4: I am not calling it "Folders" 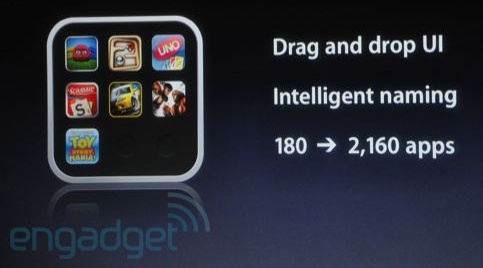 Among the new features Apple introduced in iPhone OS 4 is a new way to organize your apps called “Folders”. Great-looking feature. Great-looking implementation. But that name must go.

The system is brilliant in its simplicity. Drag an icon over another icon and they’ll automatically group together in a new icon that offers popup access both of them, plus any other icons you drag to them. Naming is done automatically based on the category of apps in the group, indicating the intent is that you group apps by category. I already do this to an extent with how I lay out my icons on my iPhone menu screens, so I anticipate abusing the heck out of this feature, though I won’t come close to approaching the new 2,160 app upper limit this allows. But I ain’t gonna call it “Folders”.

To me, the term “folders” is part of that old desktop metaphor, which works fine for desktops and notebooks, but I really hate it on my Tablet PC. I’ve done away with much of the hierarchal navigation with pen macros in ritePen. I scribble the name of a folder, and it opens up. I think of them as locations, not folders.

Likewise, on the iPhone or iPad, I’m not going to call these folders, but “Clusters”. It’s a better name in that it can also be used as a verb, as in “cluster my games together.” I know it’s silly, but I like having my desktop on my literal desktop and not in my pocket, and I want my terminology to reflect that.