iPhone Owner Gets $850 from AT&T Over Data Throttling

AT&T’s data throttling policy, aimed at curbing consumption of those grandfathered into unlimited data plans, has drawn the ire of smartphone owners on one of the nation’s largest cellular providers. However, one man decided to take his frustrations a step beyond customer service and beyond the forums where most complaints take  place.

Matt Spaccarelli has taken his battle against AT&T and its data throttling policy to the courtroom.

And rather surprisingly, Spaccarelli won.

On Friday, Russell Nadel, a judge with the Ventura Superior Court in Simi Valley ruled in favor of Spaccarelli in his case against AT&T.

Nadel awarded him $850,$85 for each month left on his contract, and ruled that it was unfair for AT&T to slow down his data when the carrier had sold him a plan with “unlimited data.”

The company had, up until last year, allowed those grandfathered into unlimited data plans to keep using unlimited data. However late in 2011, AT&T started slowing down the data for the top 5 percent of data hogs owning such a data plan.

Spaccarelli was among those that saw his data slow to a crawl and like many smartphone owners who saw their data speeds throttled, he became upset. Upset at the fact that the carrier had promised unlimited data but had reneged on its agreement before the end of his contract.

So after a couple months of research, he took his case to small claims court and came out with the winning judgement. His fight is not over though as AT&T has said that it will appeal the verdict.

And if other iPhone owners follow suit, it could end up appealing a few more cases in the months ahead.

There are currently around 17 million iPhone owners who are still grandfathered into unlimited data plans and they too could attempt to take their fight to the courts. They just won’t be able to do so together.

AT&T has a clause in its subscriber contract that prevents customers from  forming class action lawsuits. That is why Spaccarelli had to take his case to small claims court.

What this means is that AT&T could be bogged down in small claims courts by thousands of customers who perceive the company’s data throttling policy as an unfair practice.

As we proposed last week, the best way to beat AT&T’s throttling might be to start consuming more data.

(Read: The Best Way to Beat AT&T’s Data Throttling is to Have Everyone Consume More Data!) 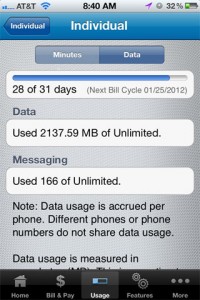 If everyone on AT&T were to start using more data, it would then push the data ceiling further up so that the top 5% of data use would be raised to a higher number and thus, everyone would be able to consume more data then they do now.

Problem is, AT&T won’t tell customers what that threshold is. Instead, it just says that it throttles the top 5%. As we now know, the ceiling seems to fall somewhere between 1.5GB and 2GB.

Go past that, and the carrier will slow your data down to 2G EDGE speeds.

So, if every AT&T customer were to work together to increase that threshold by consuming more data, AT&T would be beaten at its own game and iPhone, Android, Windows Phone, and BlackBerry users alike could enjoy data intensive content without the fear of being throttled.

In theory it would work, but when it’s as easy as heading down to small claims court to pick up an $850 check, there is little incentive.